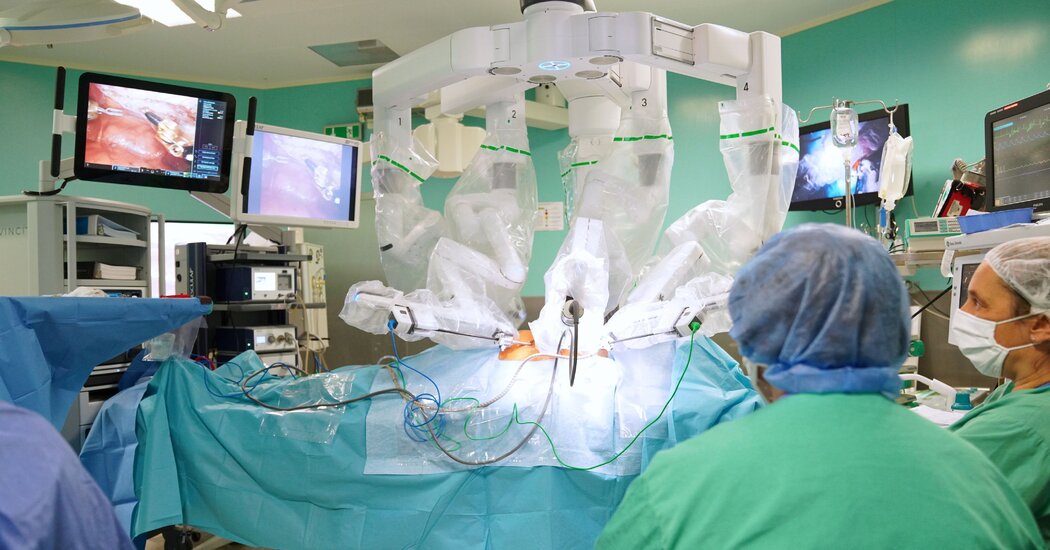 Surgical procedures performed with the aid of a robot is sometimes marketed as the “best” form of surgery. But a recent review of 50 randomized controlled trials, testing robot-assisted surgeries against conventional methods for abdominal or pelvic procedures, suggests that while there may be some benefits to robotic surgery, any advantages over other approaches are modest.

Robotic surgery is performed by surgeons, not robots. But instead of conventional hand-held tools used in laparoscopic surgery, which involves tiny incisions, and open surgery, in which the surgeon enters the body through a large incision, the doctor uses a machine. The surgeon controls the machine’s tools remotely by using joysticks and foot controls while viewing the surgical site through a high-definition monitor that provides a three-dimensional image of the procedure.

Some surgeons believe that these robots allow more precision during the operation, shorter recovery time, and generally better clinical outcomes for patients. But the review found that in many ways, compared outcomes from the robotic and conventional procedures showed little difference.

For example, in 39 studies that reported the incidence of complications requiring further surgical interventions, up to 9 percent of conventional laparoscopies led to such problems, but so did as much as 8 percent of robotic operations. In studies of gastrointestinal surgery, life-threatening complications ranged from 0 to 2 percent for robot-assisted surgery, from 0 to 3 percent for laparoscopy and from 1 to 4 percent for open surgeries. The findings were published in Annals of Internal Medicine.

Long-term outcomes of at least two years were reported in eight of the reviewed studies, and they found that mortality rates were similar in all three techniques. In up to 3 percent of robotic surgeries and 5 percent of open surgeries, the patient died. There were no deaths in laparoscopic procedures.

The researchers did find some time differences between the procedures, however. In short, robot-assisted surgeries generally take longer. In studies of gynecological robotic surgeries, duration ranged as high as 265 minutes, compared with maximums of 226 minutes for laparoscopy and 187 for open procedures. In both urologic and colorectal operations, robot-assisted surgeries were consistently longer than comparable laparoscopic and open operations.

The lead author, Dr. Naila H. Dhanani, a surgical resident at UT Health in Houston, said that for a patient, there is no reason to choose robotic surgery over other modes.

“Just because something’s new and fancy doesn’t mean it’s the better technique,” she said. “Yes, robotic is safe, we’ve proven that. But we haven’t proven it’s better. There were four studies that showed a benefit with robotic surgery, so that’s quite modest. Forty-six showed no difference at all.”

Dr. James A. Eastham, chief of urology at Memorial Sloan Kettering Cancer Center, who was not involved in the study, agreed.

“No one would argue with the primary conclusions,” he said. “The intra-operative complication rates and postoperative outcomes are similar regardless of surgical approach. It is far more important to select an experienced surgeon with specialization in a particular field rather than picking a technique.”

But there are certainly practical benefits for the surgeon. Operations can last for hours, and in conventional procedures the surgeon has to remain standing, bending, twisting and turning to move the tools into the right position. Not so with a robotic procedure.

“There is this ergonomic advantage,” said Dr. Gerard M. Doherty, surgeon-in-chief at Brigham and Women’s Hospital in Boston who had no part in the study. “We move the arms of the robot while sitting comfortably. I have one surgeon who told me it will extend his career by a decade.”

But robotic surgery is more expensive than other methods. The initial cost of the machines, the disposable instruments they require, the contracts for servicing the devices and the extra time spent in operating rooms make them so expensive that many hospitals cannot use them. The average initial cost of a robotic setup is about $2 million.

Even in large health care centers, robots have their limitations. “We have 64 operating rooms, and only four of them have robots in them,” Dr. Doherty said.

One company, Intuitive Surgery, which makes the da Vinci robots, has such a dominant market presence in the United States that they are essentially without competition, and this may be a factor in keeping the prices high. But more competition may be coming.

“I’ve seen robots made by other companies,” Dr. Doherty said. “Everyone’s hope is that if someone can bring a new platform in, then prices will come down. But we’ve been saying that for a decade. Intuitive has been pretty aggressive about maintaining their market.”

In any case, according to Dr. Eastham, the future of surgery is robotic. “Despite the lack of evidence that robotics is ‘better’ than true laparoscopy or open surgery,” he said, “there is no question that in the U.S., the shift to robotics has already occurred.”