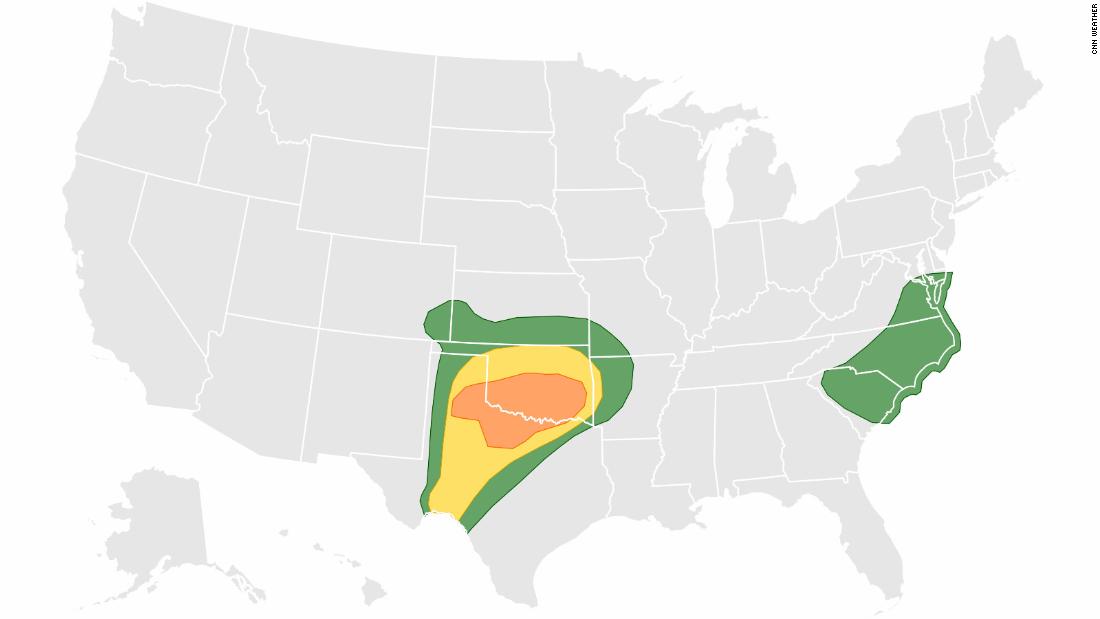 “If you are in the risk area, sunshine is not your friend today,” CNN meteorologist Chad Myers said. “The more sun … the hotter it gets … and the more explosive your atmosphere becomes.”

By contrast, cloud cover from less violent storms could reduce the heat needed to fuel afternoon storms across Oklahoma and push the worst of the severe weather into north Texas.

“Any morning thunderstorms may … act to limit the northward advance of the warm front across (Oklahoma), and the placement of the effective warm front by this afternoon/early evening remains a source of considerable uncertainty,” the Storm Prediction Center said Wednesday.

“Multiple corridors and rounds of potentially significant severe thunderstorms (are) possible,” it said.

An enhanced severe threat outlook — Level 3 of 5 — covers northwest Texas into Oklahoma, including Oklahoma City, the prediction center said, while a slight risk — Level 2 of 5 — surrounds that zone and includes other populous places like Tulsa in Oklahoma and Lubbock and Ft. Worth in Texas; Dallas is in the lowest risk level area.

The higher the risk level, the more confident forecasters are that severe weather, including tornadoes, is likely in that area. It doesn’t mean huge hail or a tornado won’t happen in the lowest risk area, just that it’s less likely based on atmospheric conditions.

Get ahead of the storm: Sign up for weekly email updates from CNN meteorologists

While it’s still not certain where the worst of Wednesday’s severe storms will be, “a very volatile afternoon and evening are shaping up for southern Oklahoma and northern Texas,” Myers said. “The ingredients are coming together for significant storms that will produce very large hail, damaging winds and powerful tornadoes.

“The message is clear that severe weather will happen today and tonight,” he added. “Some areas may even see multiple rounds of severe storms by Thursday morning.”

Tornadoes return Thursday to the South

Thursday’s forecast is a little less clear on the “placement of the most severe weather due to the storms that are firing off today,” Myers said Wednesday.

“Wind damage, hail and a few tornadoes are expected” Thursday across the South, the prediction center said.

While straight-line winds pose a greater risk, tornadoes could form in isolated storms ahead of the main line of storms, then within it as it pushes through the risk zone.

An enhanced risk of severe weather on Thursday — Level 3 of 5 — covers most of Arkansas and portions of Louisiana and Texas. The zone covered by a slight risk — Level 2 of 5 — is much larger, stretching from Dallas to St. Louis.