May 9: Why this is a big day for Russia 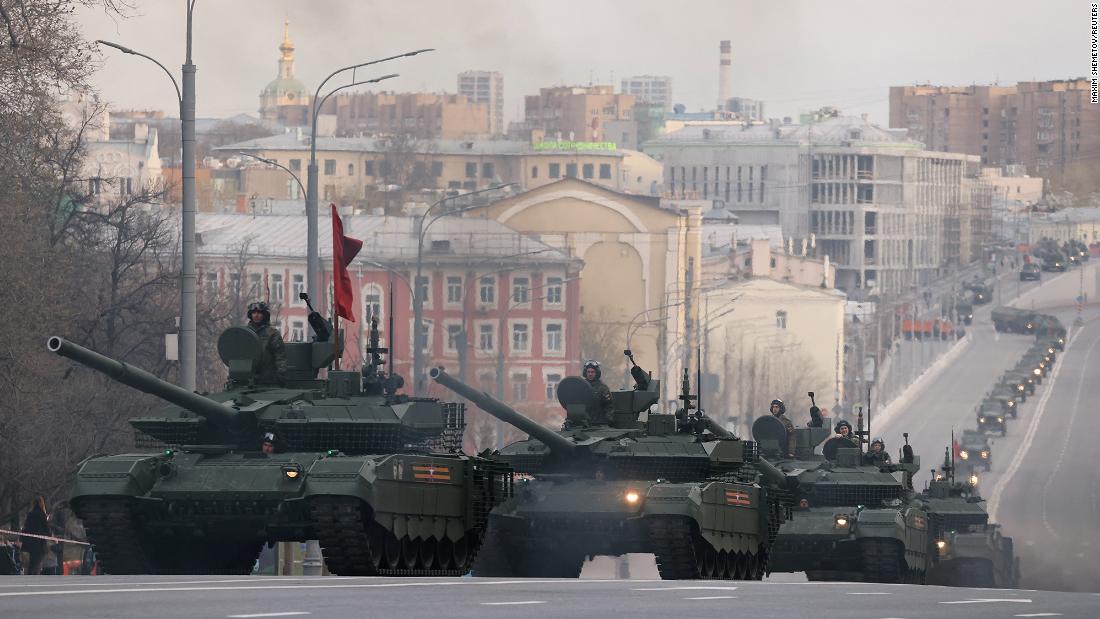 However, Western officials and analysts believe that could change on May 9, a symbolic day for Russia, with a formal declaration of war that will pave the way for Putin to step up his campaign.

May 9, known as “Victory Day” inside Russia, commemorates the country’s defeat of the Nazis in 1945.

It is marked by a military parade in Moscow, and Russian leaders traditionally stand on the tomb of Vladimir Lenin in Red Square to observe it.

“May 9 is designed to show off to the home crowd, to intimidate the opposition and to please the dictator of the time,” said James Nixey, director of the Russia-Eurasia Programme at Chatham House told CNN.

Western officials have long believed that Putin would leverage the symbolic significance and propaganda value of the day to announce either a military achievement in Ukraine, a major escalation of hostilities — or both.

The Russian president has a keen eye for symbolism, having launched the invasion of Ukraine the day after Defender of the Fatherland Day, another crucial military day in Russia.

Putin has many options on the table, according to Oleg Ignatov, senior analyst for Russia at Crisis Group. “Declaring war is the toughest scenario,” he said.

Meanwhile, Ukrainian President Volodymyr Zelensky — who has not formally declared war on Russia — imposed martial law in Ukraine when the Russian invasion began in late February.

That would allow the government not just to assemble troops but also to put the country’s economy on a war footing.

Russian forces have lost at least 15,000 soldiers since the beginning of the war, according to Nixey, and reinforcements will be needed if Moscow is to achieve its goals in Ukraine.

Mobilization could mean extending conscription for soldiers currently in the armed forces, calling on reservists or bringing in men of fighting age who have had military training, said Ignatov.

But it represents a big risk to Putin’s government, he said.

“It would change the whole Kremlin narrative,” said Ignatov, adding that the move would force Putin to admit that the invasion of Ukraine has not gone to plan.

In addition, it could diminish support for Putin at home, as some Russians support the invasion of Ukraine without wanting to personally go and fight, the analyst said.

“If they declare full-scale mobilization some people wouldn’t like it,” said Ignatov.

It could still be possible for Putin to enact the mobilization law without officially declaring war on Ukraine, he said.

This would impose rules such as restrictions on men of fighting age leaving the country, which could also prove unpopular, he added.

What else could happen?

If Putin doesn’t declare war, he may look elsewhere to make a statement to mark Victory Day.

Other options include annexing the breakaway territories of Luhansk and Donetsk in eastern Ukraine, making a major push for Odesa in the south, or declaring full control over the southern port city of Mariupol.

There are also indications that Russia could be planning to declare and annex a “people’s republic” in the southeastern city of Kherson.

“He (Putin) will be able to declare that the Russian army had some victories in Ukraine,” said Ignatov. “He can try to use this date to solidify his support.”

However it is hard to predict what Russia and its president will do, the analyst added.

“All the decisions are made by one man and a couple of his advisers,” said Ignatov.

Yet US State Department spokesman Ned Price said Monday there is “good reason to believe that the Russians will do everything they can to use” May 9 for propaganda purposes.

“We’ve seen the Russians really double down on their propaganda efforts, probably, almost certainly, as a means to distract from their tactical and strategic failures on the battlefield in Ukraine,” Price said at a State Department briefing on Monday.