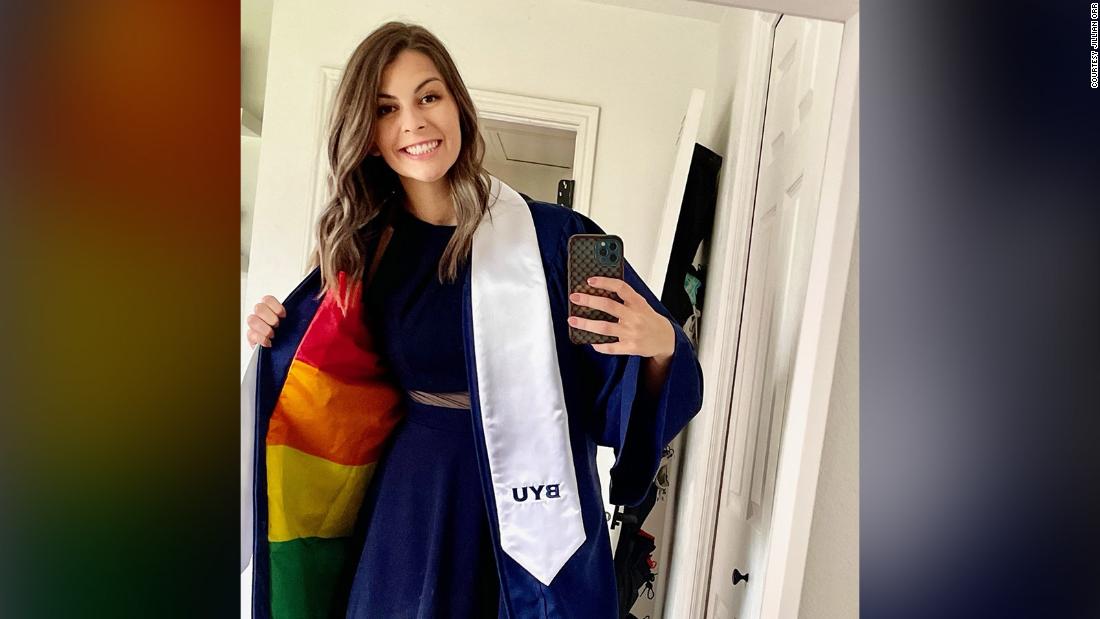 Orr planned to use her final moments as an undergrad to honor herself and the other LGBTQ students at BYU like her who hadn’t felt comfortable being fully authentic on campus, instead feeling pressured to hide some or all aspects of their LGBTQ identities. In recent years, the school has made clear that it does not embrace gender and sexual diversity.

She took a breath, smiled and opened up her graduation gown to reveal a rainbow Pride flag, which one of her sisters had sewn into the gown’s lining.
It was a quiet moment of recognition for the years she spent hiding her LGBTQ identity at a school where, Orr said, she feared school administrators and classmates might have turned her in to the school’s Honor Code Office if they discovered she’d been in a same-sex relationship. The Honor Code Office may investigate reported students and choose to take action against students for perceived offenses, including expulsion from the university, according to BYU.

Orr said she didn’t intend her rainbow reveal, her younger sister’s suggestion, to stand as a rebuke to her alma mater.

“I wanted to do this to be honored, to be seen,” Orr told CNN.

To Orr, her faith and identity aren’t at odds

Orr said she had been comfortable at BYU until she felt attracted to another woman.

“I felt like I was forced to choose between my spirituality and sexuality,” Orr said. “It created this inner turmoil and despair, because they’re both so important to me.”

Orr spent time reconciling her bisexuality with the teachings of the Church of Jesus Christ of Latter-day Saints, which holds that gay, lesbian and bisexual people can “fully and worthily participate in the Church” so long as they don’t act on their same-sex attraction. (The church holds that sex is “reserved for a man and woman who are married.”)

“I did keep it hidden,” she said of a past queer relationship. “The only people who knew were my immediate family. People I knew could turn me in if they knew. I never felt I was fully authentic.”

She felt confident, after speaking with her best friend and mentor, that her faith and her queerness weren’t at odds with each other.

In the last two years, LGBTQ students at BYU have seen their school seem to bend to inclusion, only to then double down on exclusion. In 2020, weeks before the pandemic would halt in-person classes, BYU administrators removed a passage from the university’s honor code that explicitly banned “homosexual behavior.” At the time, LGBTQ students were cautiously optimistic that this meant they could be more open about their relationships on campus.
Then came the apparent reversal: Two weeks after students celebrated what they believed was a major change to the honor code, the church clarified that “homosexual behavior” was still “not compatible” with the school’s values. Orr, who was on campus during the whirlwind of celebration and subsequent letdown, called the announcement a “kick in the knees.”
Orr said she was ready to “get to the finish line” and graduate so she wouldn’t have to shield her identity on campus, a process made easier when she was attending classes virtually. But, in a viral TikTok and in conversation with CNN, she recalled taking a quiz her senior year in which students were given a prompt about the actions of “one who truly loves LGBTQ people.” Orr said the answer she chose, which included unconditional love and acceptance, was marked incorrect.

“I had these courses that were causing me to betray myself through my own homework,” she said.

BYU did not immediately respond to multiple CNN requests for comment on the quiz and Orr’s actions on the graduation stage.

Matty Easton, the 2019 BYU valedictorian who used his graduation speech to come out, praised Orr for using the commencement stage to make a statement.
“BYU can prohibit speakers from coming out, but they can’t keep students from sharing their truth,” he tweeted late last month. “Feeling very inspired by this graduate using commencement to come out.”

Orr, who’s now a director of an after-school program for young people, said her spirituality is intact, but her relationship with the Mormon Church is fractured.

“I have a lot of gratitude and I have a lot of pain,” she said. “So, at this moment, I can no longer affiliate with a religion that is not all inclusive.”

As for the university, Orr said she doesn’t hold any ill will toward the school. She said she hopes it heeds the calls of its LGBTQ students and allies to better support them.

“I will give BYU space to change,” she said. “I think they’re capable of it.”