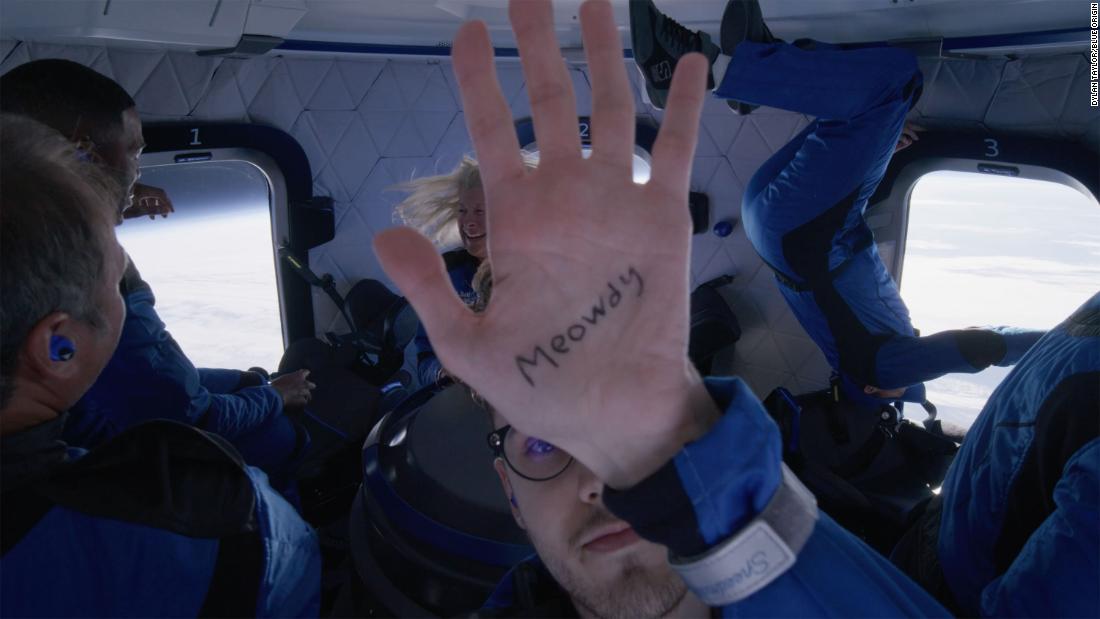 Much of their footage was captured by on-board cameras and edited by Blue Origin before being sent to the passengers as a momento, they said, revealing how the passengers reacted to various moments of the experience.

Bess notes, for example, that the sunshine from outside the window is blinding during ascent, and the group experiences more than 2.2 Gs pressing them into their reclined seats. As the rocket continues vaulting upward and the sky begins to fade from blue to black, Bess notes “my eyes are watering,” because they didn’t want to take their eyes off the view despite the blinding light.

CNN Business also conducted separate phone interviews with Bess and Taylor about their experiences. Additional comments that Bess made in their YouTube Q&A have been included below.

What happened while they were waiting for liftoff?

The footage Taylor shared from inside the capsule tells it all.

Kevin Sproge, the Blue Origin employee who helped strap the passengers in before launch, tells Shepard Churchley, “Your dad would be so proud.”

Bezos also climbs aboard the capsule briefly to address Shepard Churchley as they await launch.

“When your father became the first American to go into space six decades ago, it took the entire resources of a nation state — a determined nation state — to do that. And today, you guys can do it in a completely different way. That, for humanity, is what’s called progress. Big things start small. This is how it starts,” Bezos said.

“I’m happy to be on it,” Shepard Churchley replies.

They wait about 40 minutes in their seats aboard the capsule, as Blue Origin finishes the necessary technical checks, before the rocket takes off.

“Let’s light this candle!” Shepard Churchley screams before adding, “My God,” as the capsule begins to soar upward.

How did training help them prepare?

In their video, Bess also shared details about the pre-flight training, noting that — because Blue Origin’s rocket and capsule system is fully autonomous — they only have to prepare for emergency scenarios. And, to get acquainted with the visceral experience of riding aboard a supersonic rocket, the passengers would sit inside their training capsule as the sound of a rocket engine firing blared at full volume.

At the end of the training regimen, the passengers took a multiple-choice test to ensure they’d retained the most important bits of information, which Bess described in their YouTube video as “easier than the written drivers’ test.”

Overall, the training was helpful, though “there’s a big difference between just playing the sounds and feeling it all,” they told CNN Business.

Taylor also told CNN Business “you are fitted with custom earplugs, so it’s not quite loud.”

What can you see from space?

The passengers enjoy weightlessness for only a few minutes, and they’re allowed to scramble from their seats, flipping and gazing out the window to soak in and the most sweeping views of the flight.

Taylor said he could recognize the Rocky Mountains below and see out to the Gulf of Mexico.

“My perception — and it was just a brief one — was that I could see pretty much the entire North American continent more or less,” Taylor told CNN Business.

Taylor noted that he looked for the moon, which he could see. And when asked whether stars were visible while the passengers were in space, Bess says they weren’t.

“It was just black, the blue line of atmosphere around the Earth — which is round,” Bess notes in their YouTube video, “and then just the clouds and the mountains and all of that below.”

What really stood out, as Bess, Taylor and numerous other passengers before them noted, is the thin blue line of atmosphere blanketing the Earth.

“It’s like that entire blue is what you look up and see for your entire life,” Bess told CNN Business. “And then now it’s below you — and you can see right right through it.”

How did it feel to experience nearly 6Gs on the way back down?

As the capsule begins to fall back toward Earth, the passengers scrambled back into their seats and braced for the most intense G-forces of the journey. Bess and Taylor note that they reached up to about 6 Gs — or the feeling of six times the force of Earth’s gravity — and the footage shows labored facial expressions spreading across the passengers’ faces.

“Your face literally gets pulled back [and] it was hard to breathe a little bit,” Bess told CNN Business. “I personally — nobody else in the crew had this — but I tend to have some blood circulation issues, and I actually started to get the tunnel vision, your vision going black…It wasn’t bad. But, you know, it was intense.”

They added that they imagined the sensation was similar to being stuffed under a “300 pound weighted blanket.”

The passengers could only feel all 6 Gs for about 10 seconds, Taylor added, but it was still intense.

Was any of it painful?

Bess noted they didn’t experience any issues with inner ear pressure during the rapid altitude change because the cabin was pressurized, though they did experience a bit of motion sickness near the end of their zero gravity experience.

“But it was manageable,” they said.

Bess also noted that the landing, while perhaps among the most visually jarring because of the large puff of desert sand the capsule sets off upon touch down, is actually “one of the least rough parts of the entire flight” because air jets that Blue Origin has installed on the bottom of the capsule provided a nice cushion.

But after the rocket engine then quits firing, and the cabin immediately shifts into zero gravity, there is a jolting thump as the crew capsule separates from the rocket.

“You’re essentially blowing the two vehicles apart,” Taylor told CNN Business. “It’s pretty violent. It kind of felt like a little bit of a slow motion car crash, maybe. Very, very jolting. So that was a bit of a surprise.”

What did this mission mean to you?

Bess shared their thoughts on what it meant to them to be representing the LGBTQ+ community and furries “in such a big first.”

“I can’t represent these groups perfectly because they’re such diverse groups, and that’s kind of what makes them special,” Bess said in their YouTube video. “But I’m just glad to be providing, you know, a vector of visibility because visibility really leads to normalization. It’s when you’re kept invisible that I think it can lead to a misunderstanding of character or what you stand for.”

They added that “it’s incredibly special that the book of history of the first parent and child in space is one of a queer child and that their parents are accepting of that and went on this journey with them.”

In a statement to CNN Business, Blue Origin said “it was an honor to fly Cameron and their father, Lane, on New Shepard. In addition to being the first parent-child in space, they’re also early pioneers in Blue Origin’s vision of millions of people living and working in space for the benefit of Earth.”

Would you go back to space?

Taylor is also a ticket holder on Virgin Galactic, the venture founded by British billionaire Richard Branson that uses a rocket-powered plane to brush the edge of space. That company hopes to begin regular commercial flights later this year, though Taylor expects a few hundred people who reserved their seats before him will get to go first.

“I would like to go orbital, and I’m actively considering that,” Taylor told CNN Business, referencing the type of flights currently offered by SpaceX. He declined to share details about those conversations.

Taylor, who also donated the equivalent of his Blue Origin ticket price to several philanthropies, is also advocating for other wealthy explorers to do the same. And he founded a nonprofit, called Space For Humanity, that will offer a trip to space for “exceptional leaders,” free of charge.