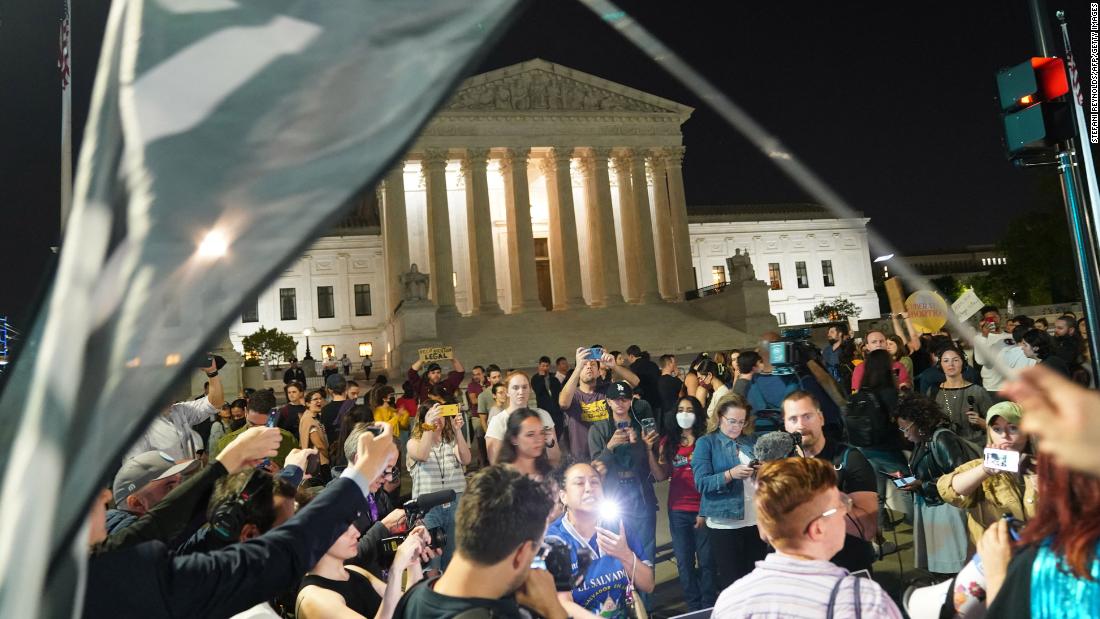 “Just now on our site, we’ve published a story, along with an accompanying side bar and document, on a draft Supreme Court opinion that would overturn Roe v Wade.”

“After an extensive review process,” Politico was “confident of the authenticity of the draft,” Kaminski and Linzer wrote, adding that the “unprecedented view into the justices’ deliberations” was “plainly news of great public interest.”

“We take our responsibilities to our readers and our publication with the greatest seriousness,” Kaminski and Linzer wrote. “Our obligation, as protected by the First Amendment, is to report the news and inform our audience. Our journalism speaks for itself, and that’s no different here.”

In journalism parlance, this is one of the biggest scoops in American journalism history. But let’s be very clear that the mysterious nature of the apparent leak is nowhere near as important as the actual meaning of the draft opinion. If the court formally issues the opinion, it will be “the most consequential abortion decision in decades,” CNN’s team reports.

“Now what does this mean? This returns the abortion issue to the states, which pre-Roe is where it always was,” Laura Ingraham said on Fox. “So in other words, some states will allow abortion liberally, some states might ban it, some will find what they believe is a middle ground.”

Ingraham’s comment that some states “might” ban it struck me as dishonest, since many GOP-controlled states already have, or will pass, laws banning abortion. I’m very interested in reading and viewing the coverage from Christian media outlets in the coming days, so I looked up the National Catholic Register, and its initial story notes that “if the decision holds, more than a dozen states will immediately outlaw abortion.”
“What we’re witnessing tonight is the loss of a right. The loss of a constitutional right,” Lawrence O’Donnell said on MSNBC. Minutes earlier, O’Donnell’s colleague Rachel Maddow said the opinion, if issued, “would fundamentally change us as a country. It would fundamentally change the relationship between women and the government. It would fundamentally change the future for… all our daughters and granddaughters, and women that come after us.”

Major news outlets on Monday night focused less on the leak circumstances and more on the potential overturning of Roe, specifically on who would be affected, while noting that the document obtained by Politico was an early draft and that drafts often change.

In partisan media, very generally speaking, the left focused more on the impacts to women, and the right focused more on the leak itself. On Twitter, the amount of chatter about the leak was enormous. Puck’s Julia Ioffe tweeted, “The focus on the fact of the leak — rather than the dismantling of women’s reproductive freedom and bodily autonomy — is so very Washington. Process over substance. Horse race over issues. It’s one of the many ways we got to this exact moment…”

A Politico spokesperson told Oliver Darcy that “the group of people working on this story” was “an extremely small group.” In other words, most staffers found out at the same time the rest of the world did. The story came out at 8:32pm ET and carried two bylines: Josh Gerstein and Alexander Ward. The reporters included all the necessary caveats up top, including that “it’s unclear if there have been subsequent changes to the draft” since February. And they addressed the shocking nature of the leak head-on: “No draft decision in the modern history of the court has been disclosed publicly while a case was still pending. The unprecedented revelation is bound to intensify the debate over what was already the most controversial case on the docket this term.”
>> Politico provided the draft opinion in PDF form, taking care to redact any metadata that might lead back to a source…

>> A source told Darcy that more than 100,000 concurrent people were reading the story at any given time all night, per internal Chartbeat analytics…

A cascade of news coverage

As Erica Orden remarked, “One of the incredible things about this scoop is how utterly unmatchable it is.” So other news outlets examined the Politico story and assessed what to do. Supreme Court beat reporters who read the 98-page document said it checked out. As WaPo’s Robert Barnes put it, “there was no reason to believe that the detailed document Politico said it obtained was illegitimate.” Fox’s Shannon Bream said she was not “waved off” of it, adding, “I’ve been led to believe that this was legitimate as a February draft.”

The result was a cascade of news coverage, becoming more intense every hour throughout the evening, blowing out planned TV segments and causing some newspapers to remake their front pages. “Illustrating how crazy this current news moment is, Anderson Cooper is breaking the news on CNN while reporting from Kyiv, Ukraine,” WaPo’s Jeremy Barr tweeted…

How did this happen?

“I can’t emphasize enough, as someone who has covered this Court for 30 years, who’s written two books on the Court, there has never been a leak anything like this,” Jeffrey Toobin said on CNN Monday night.
That’s certainly true, but as media law professor Jonathan Peters noted in this Twitter thread, “the Court does occasionally leak, and it has leaked before about Roe v. Wade.”
And the leaks kept coming on Monday night. Sources told CNN’s Joan Biskupic that “Chief Justice John Roberts does not want to completely overturn Roe v. Wade, meaning he apparently would be dissenting from Alito’s draft opinion, likely with the court’s three liberals.” As Maggie Haberman tweeted, “This is a bonkers night. A leak of the draft opinion and then a leak about the likely dissent.”

Conversations on Fox kept coming back to the grave harm caused by the document leak, perhaps out of concern that the leak was intended to change some votes and protect abortion rights. During Sean Hannity’s hour, Fox commentator Ari Fleischer said “this is an insurrection against the Supreme Court,” seemingly choosing the language associated with the January 6 attack. He said the leak would destroy trust among justices and clerks.

Later in the evening, Ingraham said she never thought she would see a leak like this. One of the on-screen banners during her show said “LEAK HAS POTENTIAL TO IRREPARABLY HARM COURT FOR DECADES TO COME.”

Ingraham said Roberts needed to immediately issue a statement. “There has to be consequences… for this individual, whoever it was,” she said, adding that “names” of possible leakers were already being “floated out there.” Fox regular and National Review contributor Andy McCarthy said on Twitter that “if this story is true, the Court should issue its opinion right away. Otherwise the disgraceful leak wins.”

Shortly after breaking the story, Politico’s Josh Gerstein said on MSNBC that the draft opinion is “a withering takedown of the Roe v. Wade precedent. It pulls no punches at all. It’s pretty brutal.” Ingraham played that clip an hour later and said “a lot of people thought the original Roe opinion was brutal as well, given what happened to 50 plus million babies.”

Top reactions about the leak

>> Democratic strategist Brian Fallon asked: “Is a brave clerk taking this unprecedented step of leaking a draft opinion to warn the country what’s coming in a last-ditch Hail Mary attempt to see if the public response might cause the Court to reconsider?”

>> SCOTUSBlog commented: “It’s impossible to overstate the earthquake this will cause inside the Court, in terms of the destruction of trust among the Justices and staff. This leak is the gravest, most unforgivable sin.”
>> Ilyse Hogue, former president of NARAL Pro-Choice America, responded to SCOTUSBlog and said “I’m going to suggest that the leak is probably not even in the top five of the gravest, most unforgivable sins of the last few years in SCOTUS world…”
>> Rick Hasen said “some may say this SCOTUS leak benefits those who oppose overturning Roe. But it actually helps the majority that overturns by (1) deflecting commentary to breach of Court secrecy norms and (2) lessening the blow by setting expectations…”
>> National Review editor Rich Lowry: “The Supreme Court justices who are going to be in the majority should get 24/7 security right away…”

— Politico health care reporter Alice Miranda Ollstein tweeted a reminder that “both sides of the abortion fight have been operating for months under the assumption that Roe is toast and making plans accordingly…” (Twitter)
— NYMag writer Rebecca Traister made a similar point: “Intellectually I am unsurprised, mentally knew this was coming, have been writing about it for years, understand Roe has been insufficient for millions, etc etc. And yet: my teeth have been chattering uncontrollably for an hour…” (Twitter)
— This WaPo story by Caroline Kitchener was published online Monday morning. It’s titled “the next frontier for the antiabortion movement: A nationwide ban.” It is running on Tuesday’s front page right under the breaking news story about the leak… (WaPo)
— “We are just getting started in our defense of human life,” Live Action president Lila Rose wrote. “We must be in every statehouse, the halls of Congress, and we will even be back to the Supreme Court to advocate for our preborn brothers and sisters…” (Twitter)
— Guardian US gender and politics columnist Moira Donegan: “It’s important to remember the human tragedy of this, not just for those who will be forced into motherhood but for all of us who will not get to experience the fruits of female talent cultivated and female ambitions fulfilled. Forced birth is a needless waste of human potential…” (Twitter)