Analysis: The voter turnout gap may be even bigger than we think 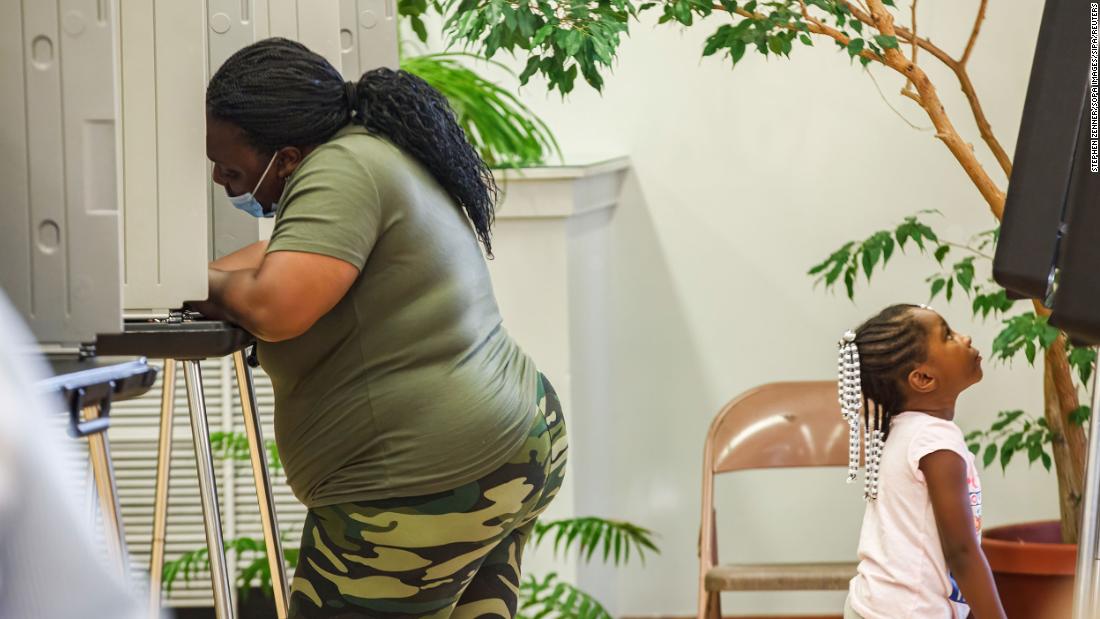 The study also points to a more civic, less partisan, challenge: a widening gap between an increasingly diverse population, especially among younger generations, and electoral results disproportionately shaped by the preferences of White voters, particularly older White voters. That could be a formula for growing social tension, political polarization and doubts about the legitimacy of governmental decisions.

“Democracy … only works if the folks that are voting, that are offering their voice, represent the needs, the values of the [entire] country,” says Ben Deufel, vice president of innovation, learning and impact at the Voter Participation Center. The fact that the disparity in turnout between Whites and minorities may be even greater than recognized, he adds, “is counteracting against that.”

Other Democratic voter mobilization experts I spoke with generally believe the study is unduly pessimistic about minority participation and exaggerates the turnout gap between Whites and people of color. The study places turnout among Black and Latino voters at a much lower level not only than the official Census Bureau numbers, which many experts think are inflated, but also than the estimates by Catalist, a leading Democratic voter-targeting firm. If any statistical study “comes out with a conclusion that means all these other things you have been believing are true are (actually) false, then they have a very high standard of proof to say not only why they are right but (also why) everybody else was wrong,” said one highly placed Democratic expert in voter turnout who asked for anonymity to candidly critique the report.
Yet even some of those who privately questioned the report to me said it served an important purpose by highlighting the persistence of the racial and generational turnout gaps — which could be exacerbated even further in the next few election cycles because many of the Sun Belt states experiencing the most rapid demographic change are among the states constructing the most new barriers to voting. If the turnout gap is even bigger than commonly recognized, Lopach says, and “the governmental and legislative response is to make it harder to vote … that is deeply concerning.”

One of the study’s most important conclusions draws little dispute: its forecast that the potential electorate will continue to diversify. The report projects that people of color will grow from 28% of eligible voters in 2010 and 34% in 2020 to just over 38% by 2030. Adding in all the groups the organization defines as the “New American Majority” — all people of color, White unmarried women and White voters under 35 — raises the total from 57% of eligible voters in 2010 to 63% in 2030.

If anything, that total may slightly understate the impact of demographic and generational change on the electorate over the coming decade, Bill Frey, a demographer and senior fellow at Brookings Metro, noted in an email. In measuring the size of its “New American Majority” the reports counts only voters younger than 35 at any given point. But by 2030, Frey points out, that definition excludes almost all Whites in the millennial generation (generally defined as people born between 1981 and 1996), who have also expressed more liberal views, particularly on cultural issues, than older generations. Including those White millennials would push the share represented by the “New American Majority” even higher.
Even using its more restrictive definition, the report projects that the share of eligible voters represented by these three groups will increase from 2020 to 2030 in every state except for Arkansas and Alabama (where they are already relatively high). By 2030, it estimates, these groups will compose at least two-thirds or more of the eligible population in three Sun Belt states that now lean at least slightly toward Republicans: Florida, Georgia and Texas. The report ranks Florida and Texas, as well as Arizona, another Sun Belt battleground that still leans slightly Republican, among the states where the three groups will increase their share of the population fastest.
These projections about the pool of future eligible voters, as Frey notes, are broadly in line with other recent forecasts, such as the nonpartisan States of Change project, which he advises. More controversial is the report’s conclusions about who votes. It estimates White turnout was higher in 2020 and turnout among Blacks and Hispanics was considerably lower than other major data sources have concluded. The Census Bureau, for instance, estimated that the share of Whites who turned out in 2020 (just over 70%) was about 9 percentage points higher than the share of African Americans (61%) and about 18 points higher than the share of Latinos (52%). Catalist, the Democratic targeting firm, put the gaps somewhat wider, at 11 points between Whites and Blacks and 24 points between Whites and Latinos.
But the new study found a much more forbidding chasm. For 2020 it placed the White turnout gap at 25 points with Blacks and at nearly 35 points with Latinos. (The report concludes that only a little over half of eligible Blacks and two-fifths of Latinos voted.) What’s more, the study concluded that the turnout gap between Whites and all voters of color was at least 14 points in every state and even higher in many states where Democrats and progressive groups have spent heavily on grassroots organizing and/or voter turnout efforts — including Arizona, Georgia, Michigan, Nevada and Pennsylvania — than in states where neither side invests much money, including Alabama and South Carolina. In the 2016 election, the new study likewise concludes, turnout among Blacks and Hispanics was much lower than either the Census Bureau or Catalist had found, while White turnout was slightly higher than either had estimated.

Looking back over the past three presidential elections, the report concluded the turnout gap between Whites and all non-Whites has actually expanded — more than doubling, in fact, over that period. The reason is that even though the share of all minorities casting ballots slightly increased from 2012 to 2020, White turnout has increased much more, according to the study’s estimates.

What to make of study’s conclusions

How did the study reach such different conclusions from other analysts about turnout rates? The answer is that all studies, when calculating turnout, pretty much use the same denominator — the Census Bureau’s estimates of the citizen voting-age population by race and age. But this study in effect used a different numerator. It estimated the racial and age characteristics of the voters in the past three elections based on data from a company that analyzes state voter files to see who has actually cast a ballot. (Under contract, the authors told me, they cannot reveal the company — though the report, and my interview with the authors, made clear the source is not Catalist, whose own publicly released analysis of the voter file produced the different conclusions cited above.)

In most states, data is not available on the races of people who vote in each election. So the firms that analyze voter lists use statistical models to project the race of each voter. The reason this study concludes that Black and Latino turnout was much lower, and White turnout was higher, is because the voter file it used identifies many more of 2020’s voters as White than other measures have done, such as the Catalist analysis, the network exit polls conducted by Edison Research, the Pew Research Center’s validated voters study and the Census Bureau findings.

Emory University political scientist Bernard Fraga, one of the study’s authors, argues the estimates it relies on are more reliable than the Census Bureau figures, which he says have been “wildly overestimating” minority turnout. But he acknowledges that any study based on analysis of the voter files — which requires its own assumptions and calculations about the races of voters — “is really tricky and fraught and becomes very complicated very fast politically for a lot of reasons.”

Michael McDonald, a University of Florida political scientist considered one of the nation’s leading experts on voter turnout, says this study should be seen as just one possibility rather than an inherently more accurate picture. “It is useful as another measurement of turnout, but voter file data introduces a different set of confounds and biases than survey data,” he told me in an email. “There is no guarantee the voter file or CPS [the Census Bureau data] better reflects the ‘truth.'”

Lopach, the CEO of the groups that released the study, says that even if “the truth is in the middle” between the estimates of minority turnout from the Census Bureau and the conclusions of the report, it means “we’ve got a lot of work to do.” To him, the message is that progressive groups cannot expect to meaningfully close these racial turnout gaps just by pouring money into minority communities right around elections but instead must invest much more in what he called “sustained, continued work” to better connect those voters to the political system.

“We need to be reaching out and talking to Latino voters, young voters, African American voters constantly,” Lopach says. “It can’t be just a quick hit in a presidential election year and then walk away. We need to ensure that these voters feel connected to their democracy.”

Fraga argues that such an effort is the most realistic response to the growing Democratic concern that the political system is stacked against them because the Electoral College and the Senate provide inordinate influence to small, heavily rural, preponderantly White and Christian Plains and Mountain states that Republicans dominate. While there’s little chance of changing the Senate or the Electoral College, Democrats could more plausibly offset the biases in both institutions by growing more competitive in states across the South and Southwest through massive increases in voting among their growing populations of minorities and young people, says Fraga, author of the 2018 book “The Turnout Gap.” “Many of these proposed reforms are way pie-in-the-sky,” he argues. “Why don’t we walk about remedying the turnout disparities and investing in that rather than getting some of these major institutional reforms?”
A big obstacle to that vision, as I’ve written, is that many of the Sun Belt states where the demographic change is advancing most quickly are also among those where the Republicans now holding statewide power are erecting the most obstacles to voting, including Arizona, Florida, Georgia and Texas. Another problem is President Joe Biden’s sagging approval rating among younger and non-White voters. Many political operatives agree that investing more in the mechanics of turnout usually isn’t enough if voters don’t also feel inspired to get off their couches, and Biden’s decline is raising Democratic anxieties about flagging midterm turnout, particularly among young people. After Trump’s surprising gains among Hispanic voters in 2020, Democratic concerns also are mounting that the GOP may be solidifying its gains with that growing group (which this study, like others, projects will increase its share of the overall non-White population through this decade).
For all these reasons, while the groups sponsoring the study believe its findings argue for increased efforts to turn out younger and non-White voters, the results could also encourage the Democratic operatives and analysts who are arguing the party can’t rely on such mobilization. Since 2020 that loose circle — which includes Democratic voices such as David Shor, Ruy Teixeira, Bill Galston and Elaine Kamarck — has argued that the party must instead focus on winning back more working-class voters, especially Whites but also increasingly Latinos, by moving toward the center, particularly on cultural issues such as crime and immigration.

To the extent Democrats accept the conclusions of this report that the generational and racial turnout gaps are even bigger and more intractable than they have believed, it will only strengthen those arguments. And if the midterm elections go as badly for the party as now seems possible, every Democratic faction is likely to be very much in the mood for an argument on the morning after Election Day in November.