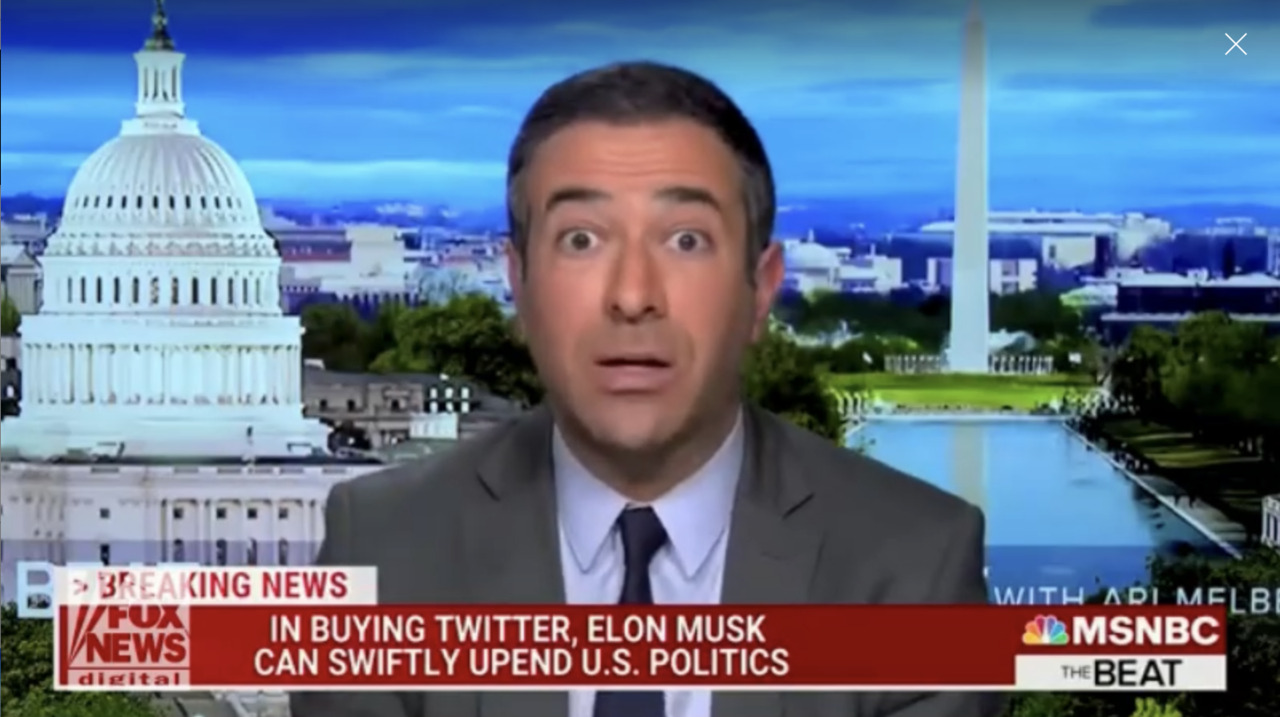 MSNBC host Ari Melber was roasted on Twitter for worrying Monday that Elon Musk could use Twitter to “secretly ban” or “turn down the reach” of a major party’s candidate ahead of an election.

Melber’s apprehension of the purchase of Twitter by the SpaceX and Tesla CEO was obvious during the Monday evening episode of The Beat with Ari Melber, where he couched Musk as potentially power-hungry rich guy willing to use the social media platform to his advantage.

The host began by stressing the significance of Musk’s purchase. “I’m just telling you this thing matters a ton. The world’s richest person, who is very good at accumulating wealth and power, thinks this is worth spending tens of billions of dollars on because, frankel,y he thinks it’s that valuable and he thinks it may help him,” he said.

Melber also brought up the specter of former President Donald Trump being allowed back on the platform after his post-January 6, 2021, ban, though he acknowledged Trump’s words, that “he won’t even return to Twitter if the ban were lifted, but few take what Donald Trump says seriously on that score.”

In this photo illustration, the Twitter logo is displayed on a smartphone with Elon Musk’s official Twitter profile. The billionaire Elon Musk bought 9% of Twitter, an investment of USD 3 billion. (Photo Illustration by Rafael Henrique/SOPA Images/LightRocket via Getty Images)

Though Melber claimed Twitter’s new ownership is “far bigger than Trump or Elon Musk,” saying they are “symptoms of the world we’re living in, where technology has outpaced any of our ability to deal with it.”

“It’s true if you are a democracy like the United States that used to regulate media ownership and say Rupert Murdoch can’t have too many local TV stations and newspapers in one town, they have laws for that are still on the books,” he said, adding that meanwhile, “Congress hasn’t gotten round to limiting whether someone can own all of Twitter.”

Then he gave his main warning: “If you own all of Twitter or Facebook or what have you, you don’t have to explain yourself, you don’t even have to be transparent, you could secretly ban one party’s candidate or all of its candidates, all of it nominees.”

“Or,” he added, “you could just secretly turn down the reach of their stuff and turn up the reach of something else and the rest of us might not even find about it til after the election.”

He then questioned Musk’s motives one last time. “Elon Musk says this is all to help people, because he is just a free speech philosophically clear, open-minded helper… Is that true? Should you take him at his word?”

Critics on Twitter torched Melber for the segment, saying the same kind of censorship the host was worried about has already been happening to the right for years.

The Rubin Report’s Dave Rubin tweeted, “This is exactly what the MachineLeftDemocrats have done to their opponents for years, you absolute [clown]@AriMelber. Enjoy the ride into irrelevance…”

Conservative commenter Greg Price tweeted, “Hey, @AriMelber, serious question: I’ve been looking for a new rock to live under and was wondering which one you use.”

“He’s merely reciting what Twitter did to conservatives. But he doesn’t realize it or convinced himself it didn’t happen,” said radio host Jason Rantz.