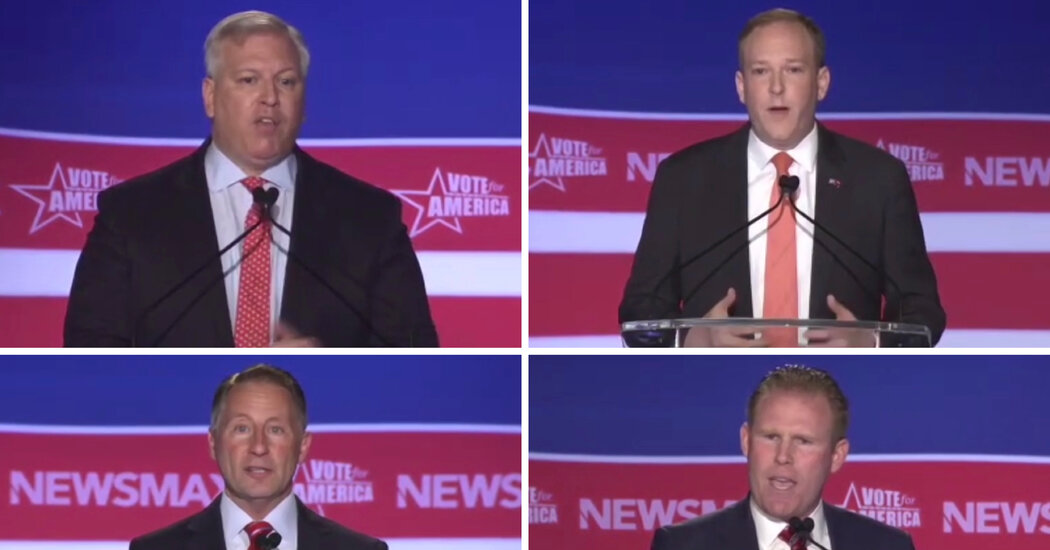 The four Republican candidates for governor of New York made their closing pitch to voters on Tuesday night, voicing devotion to President Trump and his policies, disdain for gun control and abortion, and worries about crime and immigration.

The debate, at Kodak Center in Rochester, N.Y., was hosted by Newsmax, a network known for amplifying the Republican Party’s rightward tilt, and represented the third and final clash between the quartet of conservatives vying to unseat Gov. Kathy Hochul, the incumbent Democrat who is expected to win her own primary on June 28.

And as was fitting for its host, the candidates spent much of the debate playing to the party’s base, as well as taking shots at the Democratic incumbent.

“Kathy Hochul is going to get fired,” said Representative Lee M. Zeldin, a four-term congressman from Long Island, who was chosen as his party’s designee at a party convention earlier this year. “I’m looking forward to removing her from this office.”

In the first two Republican debates, hosted by networks in New York City, Mr. Giuliani was required to participate from a separate location, because he was unvaccinated, something he says comports with his general disdain for government mandates, a sentiment echoed by the other candidates, despite the lifting of many pertaining to Covid.

But on Tuesday, he was welcomed into the fray, smiling in front of a live audience, which openly cheered and jeered the candidates.

Mr. Giuliani, 36, has tried to position himself as the race’s most right-wing candidate, saying, for instance, on Tuesday that he would “bring morality back to this state” in reference to abortion. He has also professed belief in conspiracy theories that Mr. Trump had won the 2020 election, the outcome of which he called “one of the greatest crimes in American history.”

Mr. Giuliani, who is making his first run for public office, worked for four years in the Trump administration and has actively sought the former president’s backing, saying that he uses Mr. Trump and his father as a model for what kind of governor he would be.

Mr. Zeldin, once considered a moderate, has also been a staunch supporter of Mr. Trump, though on Monday night he stopped short of saying the election was stolen. On Tuesday, Mr. Zeldin seemed more zealous about Mr. Trump’s legacy, saying he believed that the former president’s border wall should be completed.

The debate is the latest sponsored by Newsmax, which has found a niche in conservative circles in the wake of the 2020 election, often by broadcasting baseless theories about the race. The company has since been sued by several companies which make election technologies.

In early May, the network was the host of a Republican debate for a U.S. Senate seat in Pennsylvania, moderated by Greta Van Susteren, which included spirited discussion of the drug trade across the nation’s southern border, the perils of “wokeness,” and whether China should pay “reparations for Covid.” (The primary’s winner, the celebrity doctor Mehmet Oz, said yes, as did several others.)

The moderator on Tuesday was Eric Bolling, a former Fox News host who has conducted a number of interviews with Mr. Trump, including one on Monday in which the former president said that “so many” of the rioters who ransacked the Capitol on Jan. 6, 2021, were “well-behaved.”

Republicans haven’t won a statewide race in New York in two decades, but are hopeful in a year in which Democrats are facing serious political headwinds, with Ms. Hochul polling poorly on issues like crime and the economy, and waging a low-key campaign thus far.

Despite the recent racist massacre at a Buffalo supermarket, about 70 miles to the west of the debate site, none of the candidates supported any new gun control, with Mr. Zeldin saying the state’s gun laws — some of the strongest in the nation — “go too far as is.”

Mr. Astorino, who lost in 2014 to the incumbent, Andrew M. Cuomo, has stressed his experience as an executive in Westchester County, describing a state “in chaos” and arguing during the debate that a “leftist agenda” was “coddling criminals.”

Mr. Wilson suggested something similar, saying, “the problem is criminals, the mentally ill, and the purveyors of hate,” rather than law-abiding New Yorkers.

Likewise, Mr. Wilson has said that New York has been mismanaged, but has conspicuously stayed clear of most social issues; a top official in President Obama’s automotive task force, who says he did not vote for Mr. Trump, Mr. Wilson has sought to find a middle lane in the race, voicing support for abortion rights, for instance.

A lawyer and active military reservist, Mr. Zeldin periodically tried to convey a sense of statesmanship in earlier debates, reeling off a series of policy proposals, including allowing fracking in the state and rolling back changes in bail laws that conservatives have successfully used against Democrats in previous elections.

At the same time, however, Mr. Wilson and Mr. Zeldin have had a series of fiery exchanges. Monday night in Manhattan, each man called the other a “fraud.”

The animus was evident again on Tuesday, with other candidates joining in on attacks, including Mr. Giuliani, who called Mr. Zeldin “a child” and a “flip-flopper” on his support for Mr. Trump.

Mr. Zeldin fired back at Mr. Giuliani, too, saying that his claim to fame was famously mugging for the camera during his father’s first inauguration in 1994, and then being mocked on “Saturday Night Live.” He belittled Mr. Giuliani’s time with the Trump administration, describing his duties as “Chick-fil-A runner at the White House.”

The debate descended into a fit of cross-talk and bickering after Mr. Bolling asked whether the candidates would commit to endorsing the primary winner, something Mr. Giuliani, Mr. Astorino and Mr. Wilson agreed to.

Mr. Zeldin, though, was more circumspect, saying merely that he’d “be supporting the primary winner next Tuesday,” while implying it would be him.

Despite the clashes, there were some lighter moments. Mr. Giuliani has been regularly joined by his father on the campaign trail, including on Tuesday in Rochester. He was asked whether he was merely running on his family name, an accusation that also dogged Mr. Cuomo, a Democrat whose father was also governor, and who resigned last August.

“People would say, ‘Well, with a famous last name its easy to run in politics,’” Mr. Giuliani said. “I would tell you with a name like Andrew, it’s very difficult to be the leading candidate for governor.”