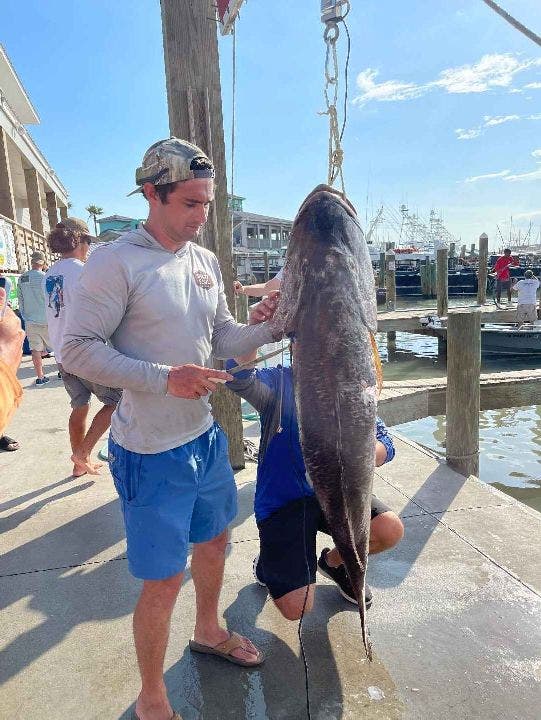 A Texas man who caught a massive fish may have broken a world record in spearfishing.

On June 3, the pair hopped on their 25-foot panga boat and traveled “offshore off the coast of Texas” like they usually do, Sherron told Fox News Digital, in an email.

FLORIDA FISHERMEN CATCH A WARSAW GROUPER THAT WAS BIGGER THAN A MAN: ‘IT WAS A MONSTER’

Sherron, who’s a fan of freedive spearfishing, made sure he had his speargun ready when he entered the water.

“I speared the snapper while spearfishing, and it took about an hour to land,” Sherron recalled.

He added, “I wasn’t out hunting for a record fish, the fish speared just happened to be that large.”

Photos of the rust-colored fish show the cubera snapper appeared to be as wide as Sherron’s shoulders and about three-quarters of his standing height.

“I realized how big it was once the fish was in the boat and how I could barely lift it up,” Sherron said. “It was just huge and the biggest fish I’ve ever caught.”

Cubera snappers are a marine ray-finned fish that are commonly found in the western Atlantic Ocean. A cubera snapper’s typical maximum weight and length is 125.7 pounds and 63 inches, according to the Gulf of Mexico Fishery Management Council.

Sherron took his catch to the Port Aransas Fisherman’s Wharf in southeast Texas for weighing, which revealed the cubera snapper to be 137 pounds.

“After weighing officially, I cleaned the fish and shared it with family and friends,” said Sherron. “I’ve had multiple fish fries, and everyone has loved it.”

He continued, “It has been exceptional eating, despite being such a large fish and will be eaten throughout the coming months.”

Sherron’s catch could be a record-breaker with the International Underwater Spearfishing Association (IUSA).

Records published by the association show the current cubera snapper record under the men’s speargun category was caught in 2006 in the waters of Brazil and weighed 122.4 pounds.

Andrew Ansin, president of the International Underwater Spearfishing Association, told Fox News Digital that the association “is aware of the catch but has not received an application” from Sherron at the time of publication.

“We hope he submits one,” Ansin said. “This was an awesome catch.”

Sherron said his cubera snapper catch was filmed, and he plans to share a video about his experience to his YouTube account, @Braden Sherron, where he posts all his offshore fishing and spearfishing trip videos.

Cortney Moore is an associate lifestyle writer/producer for Fox News Digital. Story tips can be sent on Twitter at @CortneyMoore716.