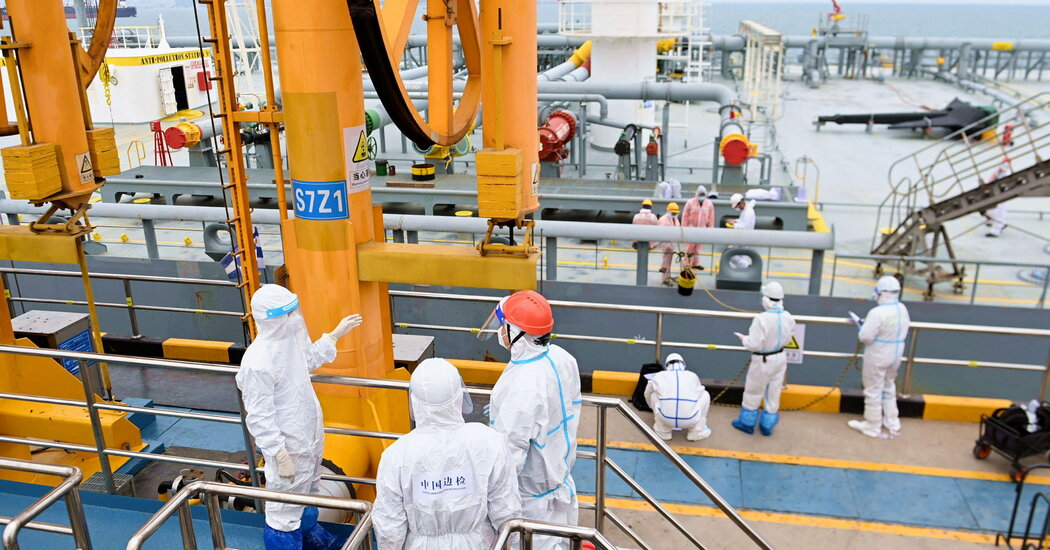 DRUZHKIVKA, Ukraine — A small town in eastern Ukraine has become a flash point in the country’s struggle to defend a slowly shrinking pocket around the two strategically important cities of Sievierodonetsk and Lysychansk.

Reports over the weekend that Russian forces had broken through the Ukrainian front line in Toshkivka, a town roughly 12 miles southeast of the metropolitan area of both cities, were a troubling development for Ukrainian forces defending a swath of territory roughly 30 miles wide that has come to be known as the Sievierodonetsk pocket — and where Ukraine’s leaders say the fate of the country’s Donbas region could be decided.

The pocket is about three-quarters encircled by Russian forces, leaving only a small gap — traversed by a mix of country roads and highways buffeted by artillery fire — where Ukrainian forces can shuttle supplies and troops into Sievierodonetsk and Lysychansk.

The twin cities, at the northernmost edge of the pocket, are the last major population centers in the Luhansk Province of Donbas not to have fallen to Russia, as Moscow’s forces intensify their push to seize more of eastern Ukraine.

Sievierodonetsk is almost completely controlled by Russian forces while Lysychansk, which lies on higher ground on the western bank of the Siversky Donets River, is preparing for an all-out assault. On Sunday, Ukrainian troops had dug fresh defenses in parts of Lysychansk and were emplacing destroyed vehicles to create choke points on some roads.

As of Monday afternoon it was still unclear which side held control of Toshkivka. Russian forces claimed to have captured it, with the pro-Moscow leader of Chechnya, Ramzan A. Kadyrov, proclaiming its “liberation” in a post on Telegram, the messaging app. The claim could not be immediately verified.

The small town has served as a key Ukrainian defensive line in the southeastern side of the pocket. If Russian forces control Toshkivka, it would bring them that much closer to Lysychansk and Sievierodonetsk — and more important, closer to threatening the Ukrainian supply lines to both cities, leaving thousands of Ukrainian troops at risk of being cut off.

Videos posted online in recent days showed a column of what were apparently Russian tanks advancing into the western edge of Toshkivka.

Ukrainian soldiers on the ground in the Donbas, a region of rolling hills and industrial towns where Toshkivka lies, told The New York Times on Sunday that the town had fallen, despite Ukrainian officials’ assurances that the Russian advance had been thwarted.

Serhiy Haidai, the regional military governor, acknowledged that the Russians had “had success” in the Toshkivka area on Sunday, but added that Ukrainian artillery had halted their advance. Hours before Mr. Haidai’s statement on Telegram, Ukrainian tanks and rocket launchers were seen barreling toward the front line around Toshkivka.

Mr. Haidai also confirmed that Russian forces had seized Metolkine, just east of Sievierodonetsk, after Moscow claimed on Sunday that it controlled the town. He described the situation in the area as “hell” amid a blizzard of Russian shellfire, with battles flaring “in multiple villages” around the two cities.

Kyiv’s battle to hold the Sievierodonetsk pocket centers on a strategy of drawing enemy forces into close urban combat, where tall buildings and cramped streets reduce the impact of the Russians’ overwhelming firepower, and make it harder for Moscow’s forces to call in artillery strikes without hitting their own troops.

But that decision could backfire if Russian forces manage to sever the supply lines into both cities, leaving Ukrainian forces there in a situation reminiscent of the siege of the southeastern city of Mariupol earlier in the war. Those troops would in effect be cut off and subject to capture, and Russia would be able to claim complete control over Luhansk, which forms roughly half of the Donbas.