His first visit to the Smithsonian changed his life. Now he's leading its newest museum 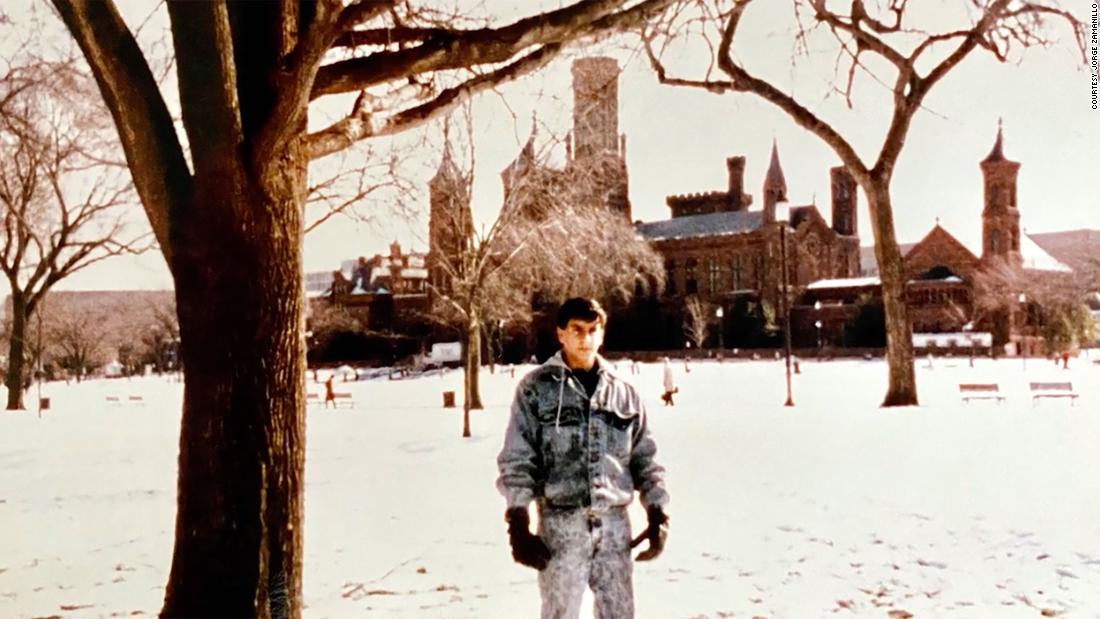 The 18-year-old flew in from Miami wearing jeans and a denim jacket in the dead of winter.

Outside, Washington was so snowy and frigid that Jorge Zamanillo had to buy a hat, gloves and scarf from a street vendor.

But inside the many Smithsonian museums he visited that week, Zamanillo discovered a world that was warm and inviting. And for him, it was all completely new — and life-changing.

“I fell in love with museums,” Zamanillo says. “I changed my major immediately from music to anthropology.”

Before long, the one-time trumpet player who’d never set foot in a major museum went on to become an archaeologist, and later a curator.

Fast forward three and a half decades and Zamanillo once again has just arrived in Washington from Miami, this time as the muggy summer days are beginning in the nation’s capital. He’s back at the Smithsonian. And it’s not only the weather that’s different.

When I visited the museum when I was younger, I fell in love. I fell in love with museums. But I never saw my story being told here.

Zamanillo is no longer a mere visitor stopping by the storied institution’s museums. He’s been hired to run one — and to help raise $500 million to build it from scratch.

Zamanillo, now 53, recently left his job as CEO of the HistoryMiami Museum to become the founding director of the National Museum of the American Latino. The hard-fought museum, which Congress authorized in December 2020, isn’t expected to open for at least a decade and doesn’t yet have a building or its own collection. But already Zamanillo has big plans for it.
This week he sat down with CNN at the museum’s new gallery inside the National Museum of American History to share some of his vision, his own family’s story and a few things he thinks all Americans should know about Latinos. The interview has been edited for length and clarity.

What is the future you imagine for the National Museum of the American Latino? What’s your vision for what will be inside the museum — the artifacts, the stories told?

It’s way too soon to tell. I look at this gallery as a kind of incubator space. With the exhibitions we have in the Molina Gallery here over the next ten years, we’re going to explore some of those things — colonization, immigration, shaping this nation, setting those historical and cultural legacies. What do they mean? People, their thoughts, their actions, their art, their music, those are all things that are definitely going to be included, because they are what shaped the American history narrative. We need to be part of that narrative. And these stories need to be told by Latinos, from our perspective, not by someone else.

When we go out across the United States over the next few years and visit with many people, many communities, I want to hear what they think should be in a museum. I don’t want it to just come from high above. The Smithsonian’s going to tell you what it’s going to be like. I want it to be user generated. I want communities to say, “You must include these stories. You must include that.”

I’ve heard you say Latino history is American history. Why then do you think it’s so important for there to be a separate Smithsonian museum focused on the Latino experience?

It goes back to who’s telling the story, the perspective. With so many different subjects and topics to cover across the nation, a national museum can’t do it all. This space will be led from that Latino perspective, what it means to us to be sharing these stories. I want future generations to visit and see this story and how important it is in shaping the national narrative. I want Latino families and communities to come in here and say, “I can’t believe my story’s actually being told on these walls.” When I visited the museum when I was younger, I fell in love. I fell in love with museums. But I never saw my story being told here.

My parents were Cuban immigrants in the sixties. I grew up in Miami. Back then it wasn’t even that Hispanic or that Latino. We were minorities for a long time. Now Miami is like 75% Spanish-speaking. But when I grew up there, the racism was obvious. And we always felt like in order to be American, you had to be more like everybody else that wasn’t Cuban or Hispanic. And that’s not a good thing.

You don’t see your story in textbooks. You don’t see it being taught in school except for José Martí and César Chávez. They don’t teach anything else to people. That’s it. So imagine you can come to a museum and see all these different stories. You’re going to see something that you can connect with. And say, “That’s something that’s happened to me.” And that’s where it makes a difference.

A big question about this museum is where is it going to be built? What would you like to see happen?

We hired a firm to help us study many sites on or near The Mall. They’re compiling that information now. We’re shortlisting as we speak. The top sites will be presented to Congress this fall and a decision will be made by the end of the year. It’s exciting. They are all going to be amazing sites. I guarantee you, whatever we build, as long as I’m here, it’s going to be an amazing museum with a prominent location.

Is there anything that’s been surprising to you that you’ve learned about American Latinos now that you are in this position?

When I saw this exhibit for the first time, I realized so many things we had in common, so many struggles for independence — in Puerto Rico, in Cuba, the same thing was happening in Mexico. Every day I walk through here and I see something that I didn’t know happened in the past. If I see that, imagine the visitor coming in here for the first time. They’re going to see so many different stories and so many accounts and biographies and artifacts that are going to blow your mind. We have interactive information based on Pew Research demographics, and the displays have been designed with accessibility in mind. It’s really open to everyone, and that’s really encouraging to see.

But is there any particular factoid that jumps out in your mind, like, “Oh my God, I can’t believe that?”

I think it’s going back to the U.S. expansion out West. There’s a quote that Cheech Marin shares in our video: “We didn’t cross the border. The border crossed us.” How people that live in the country and are established can suddenly change nationality overnight. And yet had no say in that. And that led to uprisings and clashes. That is an incredible concept when you think about it, that you can become a U.S. citizen overnight and then be persecuted, through racist acts, pushed out by people that keep on expanding…that don’t want them there. People need to wrap their head around that. What does that really mean? What is that? And sadly, how is that still being played out today?

What are some important details about Latinos in this country that you think all Americans should know, but that many don’t?

It’s not a monolithic group. We’re not one people in the sense they may be thinking. And sadly, there are a lot of stereotypes and generalizations about Latinos. We’re all the same, or we’re all Mexican or all Puerto Rican. And those things need to be looked at, the stereotypes and those thoughts and ideas. I think learning how diverse our cultures are, but at the same time, what unifies us, different themes and topics, I think that should be the main takeaway when you visit this gallery, and when you visit the museum in the future, that it really recognize all the historical and cultural achievements and legacies that helped shape the nation toward that perfect union we strive for, that’s not just one sided. It’s very diverse.

“Every day I walk through here and I see something that I didn’t know happened in the past,” Zamanillo says of the museum’s first exhibit,
“¡Presente! A Latino History of the United States.” Credit: Astrid Riecken/For The Washington Post/Getty Images

It’s very important. The Afro-Latino experience is part of this exhibit. When you walk through here, you’ll see certain biographies and stories. And we’ve made sure to capture as many diverse stories as we can across the population. We also have a colorism project coming up through the new museum. We’re being intentional, which I think is important, from the beginning. Programing is going to be developed and we’re making sure that we include people from all walks of life in the Latino community.

What is it like, decades after your first trip to DC, to be back here assuming a leadership role at the Smithsonian?

It’s a little surreal. When the opportunity presented itself, I thought hard about it. I was happy where I was working. I’d been there for 21 years. I was the CEO. And we were doing great work. But when something like this comes along, it’s not only the Smithsonian, it’s a cause. It’s a calling — for a bigger story, for something that’s a once-in-a-lifetime opportunity, to lead the creation of this museum.

You start thinking about what your family has gone through. Your parents immigrated to this country. What does it mean to be at a certain level where you could then share those stories and try to craft that message for everybody to see? It should be somebody that went through that. And it should be somebody that’s part of the community, and that didn’t have it that easy to get to this point. I think that helps the cause a great deal.

It can be daunting, but I’m excited.