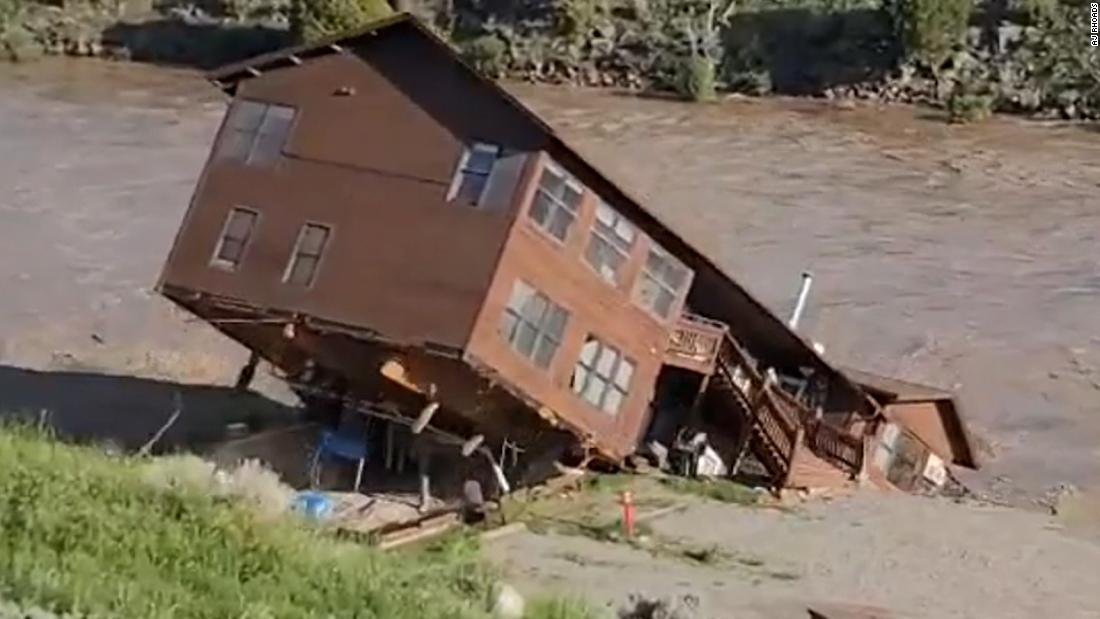 Since last weekend, Yellowstone National Park and many surrounding towns have been inundated with record levels of rainfall and flooding, prompting officials to close all entrances into the park, which stretches across parts of Montana, Wyoming, and Idaho.

The Brittons said they were used to high water levels in the river at this time of year. But on Sunday night, something felt different. Their house was shaking.

“At first, I thought that it might have just been the trees coming down the river, banging into each other,” Victoria said, “but it was shaking the house, which was very strange.”

It wasn’t until the next morning that Victoria realized what was going on: “It was actually the embankment crumbling, and that’s why the house was rumbling and shaking,” she said.

On Monday, the couple sat nearby and watched their house fall into the river.

“It was a long drawn out [process],” said TJ. “My canoe, my boat fell in. Part of the garage was hanging out. The concrete pad in front of the house was gone. And then the garage fell off. The decks fell off. And the house eventually.”

TJ told CNN he didn’t actually see his house enter the river, as he’d been picking up some supplies at a friend’s house when it happened. They started driving back upon hearing the news; when they got to the highway, they noticed a crowd had gathered near the guardrail, so they pulled over to see what was happening.

“And right around the corner of the river came my house,” TJ said. “That was the weirdest thing I ever saw in my life.”

TJ says he and Victoria are both still in shock and “trying to numb ourselves to the whole thing, but the reality is going to hit here pretty soon.”

The couple says a majority of people they’ve encountered have been very supportive, but there was one group of tourists who were “applauding and cheering when our house was floating down the river.”

“That was frustrating,” Victoria told CNN. “We heard a few people have some uncompassionate, unsympathetic things to say as we’re sitting there just waiting for our whole entire life to fall into the river.”

In a three-day period last week, Yellowstone National Park received about two to three times the typical rainfall for the whole month of June, and precipitation this month has already been more than 400% of the average across northwestern Wyoming and southern Montana, according to the National Weather Service.

According to data from the National Oceanic and Atmospheric Administration, the Yellowstone River at one point swelled to its highest level in more than 100 years.

Parts of Yellowstone National Park could reopen as early as Monday, the Casper Star-Tribune reports. But officials have said the northern section of the park will likely remain closed through remainder of the season.

“Many sections of road in [the park’s northern areas] are completely gone and will require substantial time and effort to reconstruct,” according to a June 14 news release. “It is probable that road sections in northern Yellowstone will not reopen this season due to the time required for repairs.”

Gardiner, Montana, where the Brittons live, is near Yellowstone’s northern entrance, and hotel owners say they are feeling the impact of park’s closure.

“It’s a Yellowstone town, and it lives and dies by tourism,” Park County Commissioner Bill Berg.

“There’s nobody here,” Keri Huesing, owner of Yellowstone Gateway Inn, told CNN. “We were booked solid for a year.”

Now, she says, all but one of her visitors are gone following the flooding. One neighboring hotel has shut down completely and sent its employees home.

The dangerous flooding, fueled by heavy rainfall and snowmelt, began to inundate the park and surrounding areas Monday, overtaking essential roadways and bridges and completely surrounding some communities.

In Montana’s Park County, which includes Gardiner, water had been receding, and access to some communities was restored, Greg Coleman, the county’s emergency services manager, said on Wednesday.

But the area will see the warmest temperatures of the season Friday and Saturday, which will increase snowmelt in the mountains and produce another increase of water flows into area waterways, CNN meteorologists said Friday morning. Many waterways could reach their banks by Saturday or Sunday, and minor flooding is possible — but it is not expected to compare to the levels reached earlier this week.