Analysis: Here's everything we've learned from the January 6 committee hearings so far 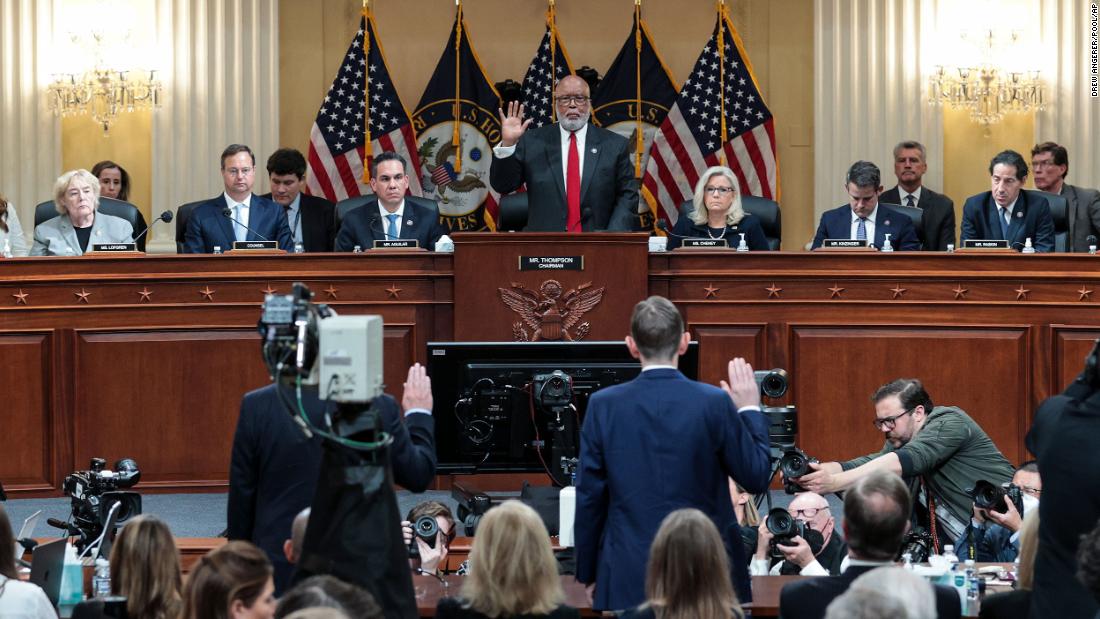 Each presentation to this point has carefully contextualized the circumstances around the attack while bolstering the committee’s mission of connecting election lies with bad outcomes.

But the sheer volume of new details has made the committee’s work tricky to follow at times, even if you’ve kept up with every presentation.

Here’s everything we’ve learned from the panel’s public hearings so far this month.

In its third June hearing, the committee detailed how former President Donald Trump tried to pressure his vice president to join in his scheme to overturn the 2020 presidential election.

Trump was told Eastman’s plan was illegal — but tried it anyway. The former President was told repeatedly that his plan for Pence to overturn the election on January 6 was illegal, but he tried to do it anyway.

According to witness testimony, Pence himself and the lawyer who concocted the scheme advised Trump directly that the plan was unconstitutional and violated federal law. Committee members argued that this shows Trump’s corrupt intentions, and could lay the groundwork for a potential indictment.

In a videotaped deposition, which was played Thursday, Pence’s former chief of staff, Marc Short, said Pence advised Trump “many times” that he didn’t have the legal or constitutional authority to overturn the results while presiding over the joint session of Congress on January 6 to count the electoral votes.
Eastman emailed Giuliani about receiving a presidential pardon after January 6. Eastman emailed Rudy Giuliani a few days after January 6, 2021, and asked to be included on a list of potential recipients of a presidential pardon, the committee revealed during Thursday’s hearing.

The committee said Eastman made the request to Giuliani, Trump’s former attorney, in an email.

“I’ve decided that I should be on the pardon list, if that is still in the works,” the email from Eastman to Giuliani read.

Eastman did not ultimately receive a pardon and refused to answer the committee’s questions about his role in efforts to overturn the 2020 election, repeatedly pleading the Fifth during his deposition, parts of which were shown Thursday.

Pence was very close to the mob. The former vice president was a mere 40 feet from the mob of Trump supporters inside the Capitol on January 6, just after Trump had tweeted about him, the House select committee showed on Thursday.

“It was clear it was escalating, and escalating quickly. When that tweet, the Mike Pence tweet was sent out,” that should have been the last tweet, former deputy press secretary Sarah Matthews testified in a taped deposition.

“It felt like he was pouring gasoline on the fire,” she added.

What we learned in previous hearings

Crowd took cues from Trump. During its first hearing this month, which aired in prime time, the panel played a compilation of some of the most disturbing footage from the January 6 attack. The footage showed how the crowd took its cues directly from Trump, with one rioter reading a Trump tweet on a megaphone for the other rioters to hear.

In that tweet, Trump criticized Pence for announcing that he would not overturn the results of the 2020 election while presiding over the joint session of Congress to certify Joe Biden’s win.

Trump didn’t want the riot to stop. The committee also revealed testimony during its first hearing this month from Trump White House officials who said the former President did not want the US Capitol attack to stop, angrily resisted his own advisers who were urging him to call off the rioters and thought his own vice president “deserved” to be hanged.

Pence — not Trump — called for help. In another new video that aired during the first hearing this month, the panel showed video of Chairman of the Joint Chiefs of Staff Gen. Mark Milley saying Pence was the one who ordered National Guard troops to respond to the violence on January 6, but that he was told by the White House to say it was Trump.

The clip was notable because of McCarthy’s role in the aftermath of January 6 — and the opposition to the House committee that he has shown ever since.
Trump’s team and family turned against him. The committee’s first hearing this month was bolstered with never-before-seen video clips showing members of Trump’s White House and campaign — as well as his daughter Ivanka Trump and son-in-law Jared Kushner — speaking about how they didn’t believe Trump’s claims that the election was stolen.
Gripping Capitol Police testimony. US Capitol Police officer Caroline Edwards was the first witness who testified before the committee this month, becoming the face of the violence against law enforcement during the insurrection.

“I was called a lot of things on January 6, 2021, and the days thereafter,” said Edwards. “I was called Nancy Pelosi’s dog, called incompetent, called a hero and a villain. I was called a traitor to my country, my home, and my Constitution. In actuality, I was none of those things.”

“I was an American standing face to face with other Americans asking myself how many times — many, many times — how we had gotten here. I had been called names before, but never had my patriotism or duty been called into question,” added Edwards.

Campaign finance details. One of the key details the committee revealed during the second hearing this month, held on Monday, was how Trump’s lies about the election turned into millions of dollars in fundraising for Trump’s campaign and the political action committee he created after the election.
Giuliani’s influence. The committee has also put a spotlight on testimony that distinguished between two groups advising Trump in the days after the election: “Team Normal” and those who were with Giuliani pushing baseless claims of voter fraud.

The committee even took a dig at Giuliani and his state of mind on election night, playing video from Miller’s deposition where he said that Giuliani “had too much to drink.”

“I mean, the mayor was definitely intoxicated,” Miller said. “But I did not know his level of intoxication when he spoke with the President, for example.”

The panel is scheduled to have two hearings next week — one on June 21 and another on June 23 — both starting at 1 p.m. ET.

Republican Rep. Liz Cheney of Wyoming, the vice chair of the committee, has broadly laid out these themes for future hearings:

Trying to use the government to spread his lie. This hearing, originally scheduled for Wednesday, but later postponed, will show how “Trump corruptly planned to replace the Attorney General of the United States so the US Justice Department would spread his false stolen election claims.”

Inciting insurrection. The final June hearings will show how “Trump summoned a violent mob and directed them, illegally, to march on the US Capitol” and “failed to take immediate action to stop the violence and instruct his supporters to leave the Capitol.”

Division drama. Members of the committee are in wide agreement that Trump committed a crime when he pushed a conspiracy to prevent the peaceful transfer of power. But they are split over what to do about it, including whether to make a criminal referral of Trump to the Justice Department, four sources connected to the panel told CNN.
Ginni Thomas emails. The House select committee is in possession of email correspondence between Eastman and Virginia “Ginni” Thomas, a conservative activist who’s the wife of Supreme Court Justice Clarence Thomas, a source familiar with the committee’s investigation told CNN.

The source who spoke with CNN would not provide details on the emails’ contents or say if they were direct messages between the two or part of a larger group correspondence. The Washington Post first reported on the emails.

Committee Chair Bennie Thompson, a Democrat from Mississippi, said on Thursday that the panel has sent a letter to Thomas asking her to speak with them about her role in the effort to overturn the 2020 electoral results. Thomas said in an interview with The Daily Caller published the same day, “I look forward to talking to them.”