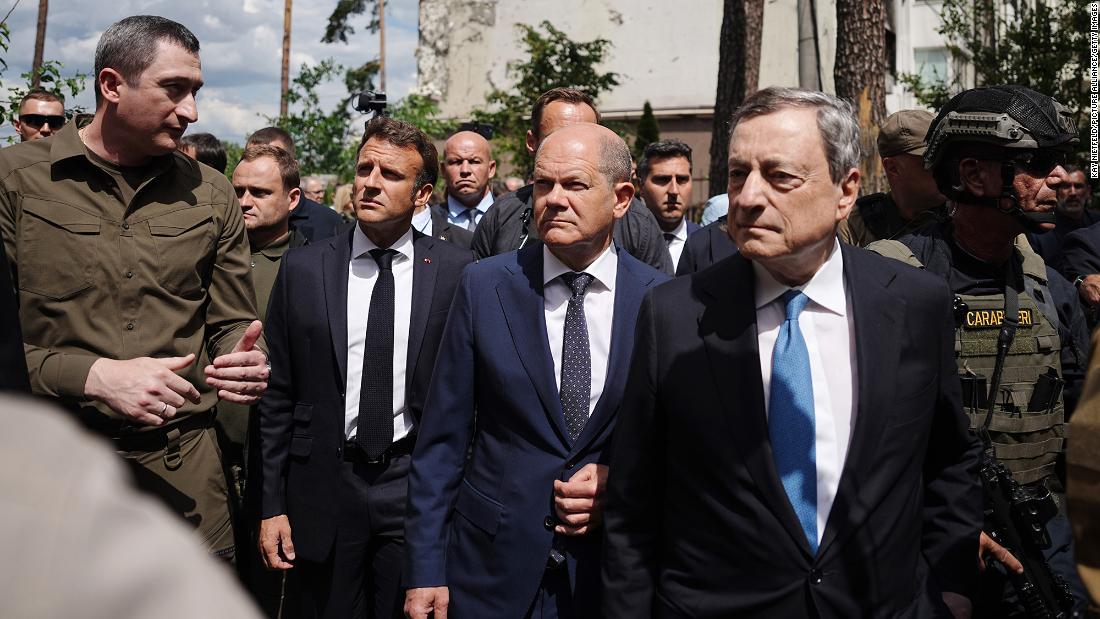 Not that they needed one.

Like other leaders before them, they traveled to the Ukrainian capital on a special train that set off from Poland in the middle of the night and was guarded by dozens of heavily armed soldiers.

The three were in Kyiv on a mission to try and smooth out tensions over what the Ukrainian government perceives as a lack of tangible support from their governments.

Macron and Scholz in particular have been on the receiving end of much criticism in recent weeks, with Ukrainian President Volodymyr Zelensky even going as far as suggesting the two were trying to appease Russian President Vladimir Putin.

Arriving in Kyiv for his first visit since the war started nearly four months ago — and long after a number of other world leaders traveled there — Macron was keen to send a message of support.

Asked by reporters at the train station whether he had a message for the Ukrainian people, the French President said: “A message of European unity addressed to Ukrainian men and women, of support to talk about both the present and the future because the coming weeks, we know, will be very difficult weeks. I want to be in support and at their side.”

But the Ukrainian leaders made it clear ahead of the visit that it would take more than words for them to believe France and Germany are serious about their support.

“Thank you for coming here, we have been waiting for you for years, for years, ” Ukraine’s Deputy Prime Minister Iryna Vereshchuk told Macron on the train platform.

The German government has promised to send more weapons to Ukraine, but it has been criticized for slow delivery.

Earlier this week, Zelensky warned that Russia would continue to push further inland. Once again, he pleaded with Western countries to send more heavy weaponry, which, he said, “has to come quicker” if Ukraine’s allies want to stymie Russia’s territorial ambitions.

“We have shown our strength [to Russia]. And it is important for this strength to be also demonstrated together with us by our Western partners as well,” he said.

Macron, Draghi and Scholz, joined by the Romanian President Klaus Iohannis, spent the morning in Irpin, the site of some of the heaviest fighting in Russia’s failed bid to capture the capital earlier this year. Since Ukraine retook the territory, substantial evidence has emerged of indiscriminate killing of Ukrainian civilians by Russian troops in Irpin and nearby areas.

The four European leaders met Zelensky later on Thursday. The group shook hands and smiled for the cameras in front of the sprawling Mariinsky Palace in Kyiv, but the atmosphere inside their meeting was likely more tense, given Zelensky’s recent remarks about Scholz and Macron’s lack of support for Ukraine.

“[Scholz] and his government must choose not to do a balancing act between Ukraine and the Russian Federation, but to choose which is their priority,” Zelensky told German broadcaster ZDF earlier this week.

He had harsh words for Macron too. The French President has tried to present himself both as an ally to Ukraine — and as an honest broker with Russia.

Macron, in an interview earlier this month, said that “we must not humiliate Russia so that the day when the fighting stops we can build an exit ramp through diplomatic means. I am convinced that it is France’s role to be a mediating power.”

Referring to the French President, Zelensky told the Financial Times that “in order to be a leader, you do not need to consider yourself one, but to behave as a leader.”