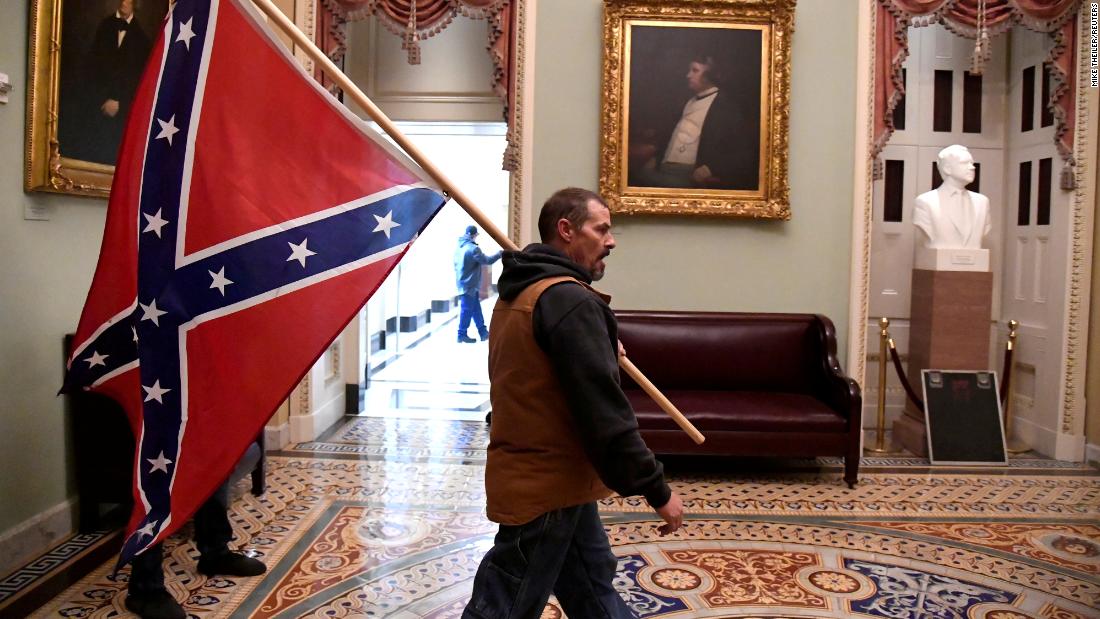 Kevin Seefried, with his wife, son Hunter and son’s girlfriend, drove from Delaware to attend the “Stop the Steal” rally that day. Kevin and Hunter Seefried followed the crowd to the Capitol and helped storm the building, climbing in through a broken window and coming close to the Senate chambers while inside.

The two men were found guilty by Judge Trevor McFadden on four misdemeanor charges as well, including entering and remaining in a restricted building and disorderly conduct in a restricted area.

Hunter Seefried was acquitted on several charges related to a window prosecutors said he helped break. McFadden found that two other men had broken the window and Hunter only removed a shard that had fallen before climbing through.

Kevin Seefried was part of the mob that faced off with US Capitol Police officer Eugene Goodman, who drew rioters away from the Senate chambers as lawmakers were fleeing the area.

Goodman, who testified Monday, said that Seefried used his flagpole as a weapon, jabbing the end of it toward Goodman.

In an interview with the FBI, Kevin Seefried recalled telling Goodman, “You can shoot me, man, but we’re coming in.”

Both Hunter and Kevin Seefried, after turning themselves in, told the FBI they were wrong to go inside the building.

“There’s nothing good about jumping through a window into the Capitol,” Hunter said, adding that it was un-American and he knew it was wrong “from the bottom of my goddamn heart.”

At one point inside the Capitol, Kevin says he recalled thinking, “This is wrong. Man, this is so wrong.”

In closing arguments Tuesday, Kevin Seefried’s attorney Eugene Ohm argued that Kevin wasn’t aware the electoral votes were being certified in Congress that day, so he couldn’t have intentionally tried to obstruct the proceeding.

Someone could set “a fire in the middle of the rotunda,” Ohm argued, but unless they knew about and intended to stop the certification they would not be guilty of intentional obstruction.

Prosecutor Brittany Reed said, however, that there was enough circumstantial evidence to show that Kevin and Hunter both knew an official proceeding relating to the election was occurring inside the Capitol that day.

The two men walked through the building with rioters who were discussing the votes and trying to locate lawmakers, Reed noted, and both men attended the rally preceding the riot, where speakers — including then-President Donald Trump — mentioned the process going on inside the Capitol.