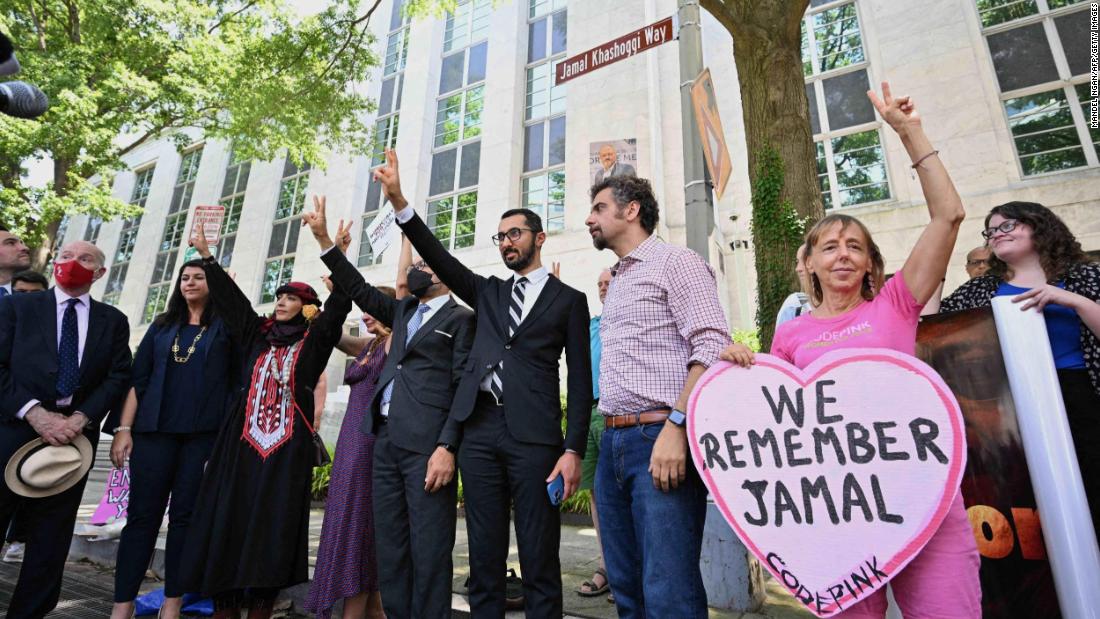 A ceremony unveiling “Jamal Khashoggi Way” was held Wednesday at 1:14 p.m. ET, symbolizing the time the journalist was last seen before his death on October 2, 2018. Democracy for the Arab World Now (DAWN), an organization founded by Khashoggi, and other human rights groups, pulled a cover from the sign, unveiling it to a gathered crowd. The DC Council had voted to rename the street in December 2021.

Abdullah Alaoudh, Gulf Director at DAWN, told the crowd that the location of the street sign is to serve as a reminder to “passerbys, to Saudi royals, to Americans, to all humans of conscience that Jamal’s legacy will live on.”

“Our message today, is that we will not move on,” Alaoudh said. “Jamal’s legacy will live on, no matter the normalization efforts.”

The Biden administration released an intelligence report in 2021 that directly accused the Crown Prince of approving the operation to capture or kill the Saudi journalist.
CNN reported last week that senior US officials conveyed to Saudi Arabia that the US is prepared to move forward with a “reset” of the relationship, and effectively move on from Khashoggi’s murder in order to repair ties, according to senior US officials. The officials said Biden, who is facing pressure to crack down on Russia and lower gas prices amid rising inflation, has set aside his moral outrage to pursue warmer relations with the Kingdom. They also said Biden does plan to raise Khashoggi’s murder directly with the Crown Prince when they meet as soon as next month

Hatice Cengiz, Khashoggi’s fiancée, previously accused the President of losing his moral compass in a statement to CNN. She was not present at the Wednesday ceremony but reiterated her criticism of Biden in a statement read on her behalf. Saying the President would be “dishonoring” himself and Khashoggi by meeting with the Crown Prince, she called on Biden to “uphold your vow to bring all the perpetrators of this brutal crime to justice.”

“But as disappointing as this is, if you have to put oil over principles and expedience over values, can you at least ask, ‘Where is Jamal’s body?’ Doesn’t he deserve a proper burial? And what happened to his killers?” she said in the statement.

“We will hold the Biden administration to account for its treacherous betrayal of the promises it made to the American people, the promises the America people wanted to hear, which is to end support for the brutal dictatorship of Saudi Arabia,” Whitson said.

Del. Eleanor Holmes Norton, a Democrat and the District of Columbia’s nonvoting US House member, on Wednesday applauded the DC Council’s decision to rename the street. She did not mention Biden’s expected trip, instead praising Khashoggi’s “brave and groundbreaking” work.

National Security Council coordinator for strategic communications John Kirby stressed to CNN’s Kaitlan Collins on Wednesday after the unveiling that Biden’s trip to the Middle East in July is about a range of issues with a “big agenda,” and defended the President seeing the Crown Prince.

“It’s counterterrorism, it’s climate change, certainly it’s oil production, obviously, it’s going to be on the agenda. And, a big item on the agenda is the war in Yemen,” Kirby said during a White House press briefing.

Pressed by Collins on why the President would meet the Crown Prince when he won’t even speak with him on the phone over his role in approving Khashoggi’s assassination, Kirby noted that as the Defense Minister of Saudi Arabia the prince is part of the King’s larger leadership team.