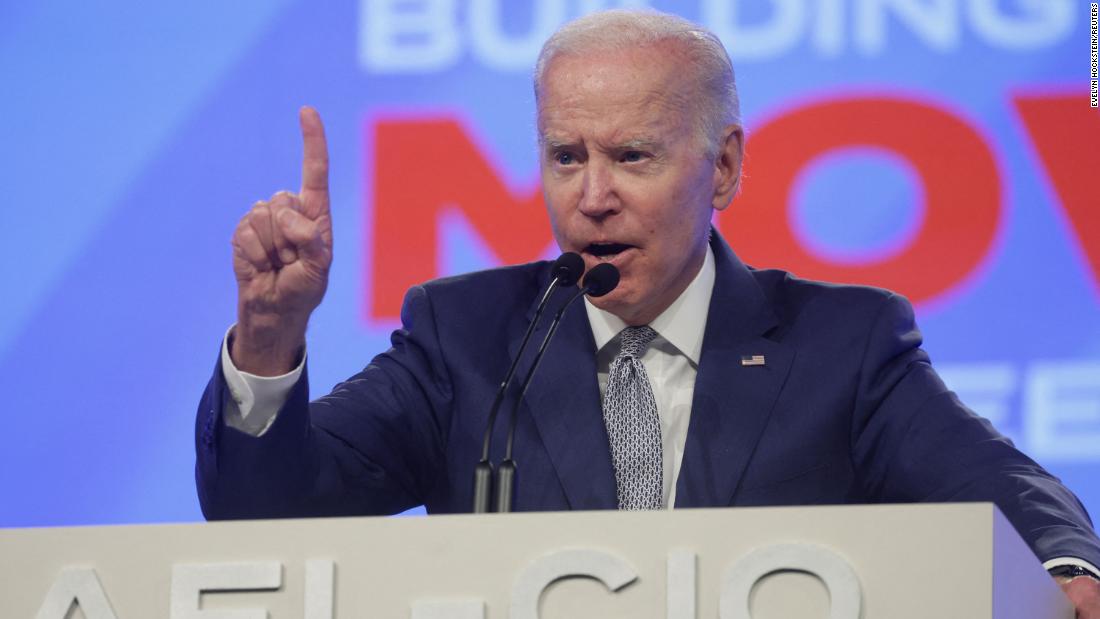 Inflation has proved a frustrating challenge for the President, who has instructed his team to continue searching for avenues to reduce financial burdens on Americans. In Oval Office meetings and conversations with his senior advisers, Biden has vented that his accomplishments on the economy are being obscured by record-high gas prices and rapid increases in the costs of other consumer products.

Biden has limited options for bringing down those prices and has deferred to the Federal Reserve to manage inflation. Yet its primary tactic — raising interest rates — has driven stock markets sharply lower and prompted fears of a looming recession.

It is against that backdrop that Biden is weighing lifting some of the Trump-era tariffs, which applied a 25% duty on billions of dollars of Chinese goods. They were intended to reduce the US trade deficit and force China into adopting fairer practices. But China’s behavior hasn’t changed, and the Biden administration says Beijing hasn’t upheld its agreements on purchasing US agricultural products included in former President Donald Trump’s trade deal.

Biden has given the impression during internal meetings that he is leaning toward easing some of the tariffs but hasn’t made a final decision, officials said. He has asked his team for more detailed analysis of what lifting some of the tariffs might mean for prices, as well as various options for action. Officials have said Biden is eager to take any steps that could combat high prices, even if the actual effect of lifting the tariffs is small, to show the American people he is focused on the issue.

Biden’s team believes it must make a decision soon as inflation continues to drag down the President’s approval ratings. The issue has been debated internally for months and has sparked an internal divide within Biden’s team.

Some advisers, including the US Trade Representative Katherine Tai, have advocated leaving them in place because China hasn’t lived up to its commitments from the Trump-era trade deal. Other members of the Cabinet, including Treasury Secretary Janet Yellen and Commerce Secretary Gina Raimondo, favor lifting some tariffs on certain goods.

Biden has also come under pressure from some Democrats and organized labor to keep the tariffs in place to protect US jobs.

“We think it’s the wrong time to relax tariffs on China,” said Liz Shuler, the president of the AFL-CIO with whom Biden met Tuesday at the group’s convention in Philadelphia.

“We think it would have a marginal impact, at best, on inflation,” Shuler said on CNN. “What really needs to happen is what the President talked about yesterday: looking at ways to bring down costs for working families.”

But some influential outside economists have encouraged the administration to lift at least some of the tariffs,

“I think if we can reduce tariffs where those tariffs aren’t strategic and are hurting us, but not doing much to the Chinese, I think that can make a meaningful contribution to reducing inflation,” said Larry Summers, a Treasury secretary to former President Bill Clinton who raised concerns about inflation last year that were mostly rebuffed by the White House.

“I think it’s going to take time to put out this fire, and it’s going to burn for a while, and it’s not going to be completely comfortable while we are putting out the fire. That’s just a consequence of the situation we find ourselves in,” Summers told CNN’s Don Lemon on Tuesday.

Still, easing some of the tariffs — which apply to all manner of household products, including clothing and electronics — may only have a limited effect in bringing down prices. Biden’s top economic advisers have limited expectations for how much money American consumers would save once the tariffs are lifted.

Yellen said last week that lifting some tariffs imposed on China could help bring down prices but should not be viewed as a solution to America’s inflation problem.

“Some reductions may be warranted,” Yellen told lawmakers during congressional testimony. “It could help to bring down prices of things that people buy that are burdensome. I want to make clear I honestly don’t think tariff policy is a panacea with respect to inflation.”

Yellen noted that goods only account for one third of consumption, emphasizing that China has been “guilty, I believe, of many unfair trade practices.”

Still, Yellen said the Biden administration is reviewing its tariff policy and changes may take place in the coming weeks.

Brian Deese, the director of the National Economic Council, also said on CNN last week that Biden would announce a decision in the “coming weeks.”

Speaking Tuesday as Biden was traveling to deliver a speech to a union convention, White House press secretary Karine Jean-Pierre called the Trump tariffs “irresponsible” and said they didn’t “advance our economic or national security.”

“We’re discussing this and working to align these haphazard tariffs and our priorities to safeguard the interest of our workers and critical industries; boosting American workers, wages, and creating jobs; securing the resilience of our supply chains; sustaining our technology edge; and advancing our national security,” she said.

“I don’t have anything to share about what the President’s decision is, at this time,” Jean-Pierre continued. “As you know, this is something that we’re discussing internally.”