GOP looks to marginalize Cawthorn if he wins Tuesday primary 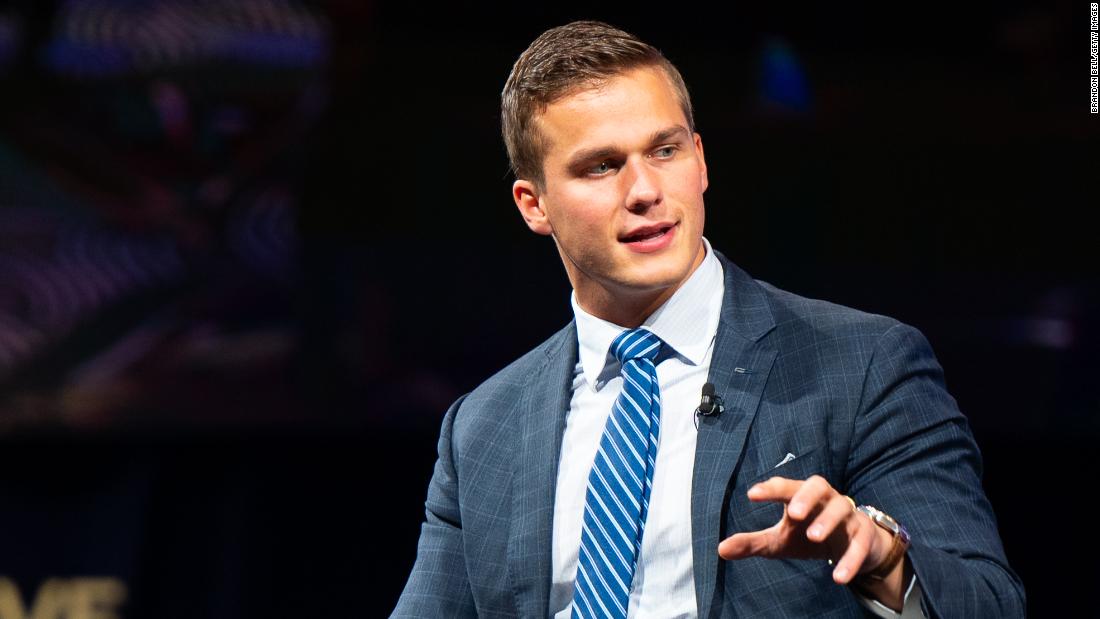 That idea of ousting Cawthorn from conference has not been discussed by Republican leadership and doesn’t appear to have wide traction inside the GOP but has been kicked around by some rank-and-file members, the lawmaker said, demonstrating the level of frustration with Cawthorn inside the House GOP. Cawthorn did not respond to a CNN request for comment for this story.

Meanwhile, some members of the hardline House Freedom Caucus, of which Cawthorn is a member, have sat him down and told the 26-year-old to get his act together, according to multiple GOP lawmakers familiar with the conversations.

As his colleagues debate his future in the party, Cawthorn — once seen as a rising star in the GOP — increasingly finds himself on an island on Capitol Hill, suggesting his problems won’t end if he manages to clinch the GOP nomination for his seat.

His mentors in Congress have given up on him, and when asked by CNN, none of the other nine Republican members of the North Carolina delegation offered support for his reelection campaign. One, Sen. Thom Tillis, is now a part of the effort to defeat him, supporting State Sen. Chuck Edwards in an effort to unseat Cawthorn.

Even one of his biggest cheerleaders, former President Donald Trump, does not appear to be riding to the rescue. Trump did not respond to a CNN request for comment.

“There’s no one thing that put me in a position to where the first time in my career I’m opposing a sitting Republican,” Tillis told CNN. “I’ve never done it. But it’s the totality. It’s a lack of seriousness.”

Before he was elected, Cawthorn had a slim resume: he worked as a manager at a Chick-fil-A, as a staff assistant in former Rep. Mark Meadows’ district office and completed one semester of college.

He portrayed himself as an owner of a real estate investment company but did not disclose any income from it.

But Cawthorn won his primary against a Trump-endorsed candidate in 2020, and quickly became a rising star on the right. He spoke at the Republican Party’s 2020 convention about how a car crash in 2014 left him paralyzed from the waist down. He began the speech from his wheelchair and ended it standing up with the support of staff and crutches.

When Cawthorn arrived in Congress, he was interested in serving on the House Foreign Affairs Committee. But the GOP Steering Committee — which doles out committee assignments and includes members of leadership — was concerned that he had posted a picture of Hitler’s vacation home on his Instagram and referred to it as a bucket list item, according to GOP lawmakers with direct knowledge of the internal conversations. In the post, Cawthorn did denounce Hitler as “a supreme evil.”

Yet Republicans still saw potential in Cawthorn and decided to team him up with a set of mentors to help groom him for a future seat on his desired committee. Both Rep. Mike Johnson of Louisiana, a member of GOP leadership, and Rep. Michael McCaul of Texas, the top Republican on the Foreign Affairs panel, were tasked with showing him the ropes, sources said.

But multiple frustrated lawmakers familiar with the situation say Cawthorn has consistently rebuffed McCaul and Johnson’s efforts to take him under their wing. They also said Cawthorn would thank lawmakers for their advice — which has ranged from getting off Twitter to stop breaking the law — and then turn around and do the exact opposite.

Now, if Cawthorn returns to Congress, top tier committees like House Foreign Affairs are out of the question, according to GOP members who have insight into the decision-making process.

“If he gets a committee at all, it will be some obscure assignment. He has zero chance (of getting on a good committee),” said a senior GOP lawmaker “We would be mocked as a conference if we put him on anything meaningful.”

House Minority Leader Kevin McCarthy and Minority Whip Steve Scalise hauled Cawthorn in for a meeting in March, where McCarthy told the freshman lawmaker that he lost his confidence in him and needs to turn his life around. At the time, McCarthy said his committee seats could be on the line if he doesn’t. Since that meeting, Cawthorn was cited a second time for bringing a firearm to the airport.

McCarthy did not answer a question from CNN on Thursday about whether he’s seen signs of improvement in Cawthorn’s behavior. But lawmakers see him as highly unlikely to boot Cawthorn from conference or committees, wanting to maintain a sense of party unity.

Scalise, when asked by CNN about Cawthorn’s future committee assignments, said: “Steering Committee makes that decision.” And when asked if the House GOP’s campaign arm is supporting Cawthorn in his primary, National Republican Congressional Committee Chairman Tom Emmer said: “We don’t get involved in primaries”

Some Republicans think Cawthorn could still redeem himself if he offered a sincere apology to the conference and started listening to their advice. But most lawmakers are doubtful Cawthorn would do that.

“It’s kind of up to him to get his act together. … But at some point in time, the conference is going to have to cut its losses,” said another GOP lawmaker. “My hope is that North Carolina-11 will deal with it. But if they don’t, my argument has always been: we should.”

Others have taken a more sympathetic tone with Cawthorn. Said Rep. Tim Burchett, a Tennessee Republican: “I actually pray for him, because I know he’s made some big blunders. And you know, it’s probably not a good thing to say, but it’s the truth. And I’ve talked to him and I’ve told him I pray for him.”

‘He’s an embarrassment on any day that ends in “y”‘

None of Cawthorn’s North Carolina Republican colleagues are coming to his aid against state Sen. Chuck Edwards, GOP official Michele Woodhouse and others.

Asked whether he supported Cawthorn for his reelection, Rep. David Rouzer said, “I’m not getting involved in the primary one way or another.”

Rep. Dan Bishop said, “I don’t have a comment on that.”

Rep. Virginia Foxx laughed, paused, and said, “Right now, I’m just going to vote.” Her campaign did not respond to requests for comment.

Last spring, Foxx posted online Cawthorn’s effusive endorsement of her. Much has changed since then.
Several former college classmates accused Cawthorn of sexual harassment and misconduct; he denied doing anything inappropriate.
He was charged with driving with a revoked license and cited for bringing a loaded gun to the Charlotte airport. A spokesman said he brought the gun “by mistake”; The congressman was not charged.
He called Ukrainian President Volodymyr Zelensky a “thug” and the Ukrainian government “incredibly evil,” shortly after Russia invaded their country. He claimed that he had been invited to an orgy in Washington and had personally seen people do “a key bump of cocaine.”
In April, Tillis said the House Ethics Committee should investigate whether he violated federal insider trading laws in promoting an anti-Biden cryptocurrency.
And this month, Cawthorn said he was “being crass with a friend, trying to be funny,” and just “acting foolish” after an opposition group released a video of the congressman appearing to be naked in bed with another man.

“I told you there would be a drip drip campaign,” tweeted Cawthorn. “Blackmail won’t win. We will.”

“I think Madison is the first Zoomer elected to Congress,” said Florida Rep. Matt Gaetz. “And I think if a lot of these Boomers and Gen Xers and a few of the older millennials had had a video camera attached to them at all times through their adolescence and in their early 20s we might think differently about them too.”

But many of those officials don’t. Retiring North Carolina Republican Sen. Richard Burr said, “He’s an embarrassment on any day that ends in ‘y.'”

Cawthorn also aggravated politically powerful critics back home, which viewed him as either unwilling or unable to deliver for his district. They chafed at stories about him closing district offices — which he denied — and his attempt to be a young kingmaker in his first year in public office.

In November 2021, he announced plans that he would change districts, kneecapping state House Speaker Tim Moore, who had been expected to run for the seat. A few weeks later at Trump’s Mar-a-Lago resort in Florida, Cawthorn gave the former President a map of the state titled “Congressman Cawthorn’s plan for North Carolina,” recommending that Trump back local GOP official Michele Woodhouse for his old district and Republican candidate Bo Hines, 26, for another House race.

This past winter, Cawthorn privately floated running against veteran North Carolina Republican Rep. Patrick McHenry, according to people familiar with the matter and closely connected to North Carolina politics. But in late February, after the congressional map was set, Cawthorn decided to stay put in his district in the western part of the state and run for reelection.

After the series of damaging revelations, Hines recently told Axios, “We’re nothing alike.”

Even Trump appears to be putting some distance between him and Cawthorn. Trump endorsed him in a video last year, but people close to the former president have been privately pointing out to others in the party that there’s no formal press release on Trump’s website touting the endorsement, according to one GOP lawmaker who has been closely following the primary race.

“I would say everybody comes to Congress with a little bit different approach. Some people are clearly workhorses and then you get some that seem to be more interested in being show horses,” said Rep. Dusty Johnson, a South Dakota Republican. “It only takes about five or six months before you figure out what really makes somebody tick around here.”

When asked where Cawthorn falls on the list, Johnson replied: “I think it’s pretty obvious.”

Rep. Tom Rice of South Carolina, one of ten House Republicans who voted to impeach Trump for inciting an insurrection, was blunter.