The states that will and won’t protect abortion rights if Roe v. Wade is overturned 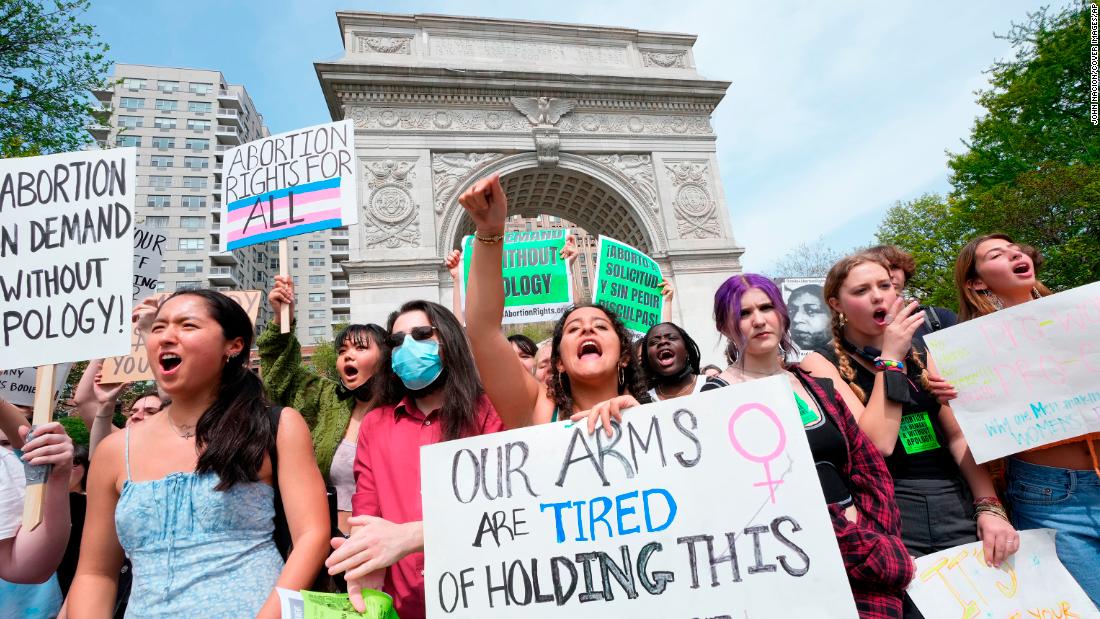 But the prospect of overturning Roe has inflamed discussions about abortion access on the state level, where legislators would have substantial power to limit abortion rights in the event that Roe is no longer the law of the land.

An analysis by the Guttmacher Institute finds 23 states have laws in place to limit abortions, including 13 that have so-called “trigger bans” in place that are designed to almost immediately enact near-total bans on abortion if Roe is ever struck down.

Still, there are 16 states in the US that protect abortion access under state law, either by guaranteeing the right to get an abortion up to a certain point in pregnancy or — in just four states and Washington, DC — protecting the right at any stage of pregnancy, according to Guttmacher.

Following the leaked Supreme Court draft, some state officials have reinforced their commitment to providing a haven for abortion-seekers and are bracing for the potential influx of abortion seekers from neighboring states with restrictive laws.
“For anyone who needs access to care, our state will welcome you with open arms,” New York Gov. Kathy Hochul, a Democrat, said in a statement. “New York will always be a place where abortion rights are protected and where abortion is safe and accessible.”

These are the states with laws in place that would protect abortion rights if Roe v. Wade is overturned.

The right to obtain an abortion in California is protected until the fetus is considered viable and in cases where the procedure is necessary to save the patient’s life or health, according to the state’s Health and Safety Code.
Democratic Gov. Gavin Newsom also signed legislation in March that removed some financial barriers to abortion services. Under the law, insurance providers or health insurance plans are banned from requiring cost-sharing payments such as deductibles, coinsurance or copayments for abortions or abortion-related care. The law applies to plans issued after January 1, 2023. For patients with high deductible plans, they would need to meet their deductible before the cost-sharing prohibition applies.

Colorado Gov. Jared Polis, a Democrat, signed a bill into law in April that guarantees a pregnant person’s right to “have an abortion and to make decisions about how to exercise that right” and bans public entities from depriving people of that right. The law does not define a time or stage of pregnancy after which abortions can no longer be performed.
The law also states that “a fertilized egg, embryo, or fetus does not have independent or derivative rights” under state law.

Connecticut law protects the right to receive an abortion until the fetus becomes viable. After that point, the procedure is only allowed in order to protect the life or health of the pregnant person. Minors under the age of 16 are required to get counseling before consenting to an abortion, except in the case of a medical emergency.
Democratic Gov. Ned Lamont also recently signed a bill into law designed to shield medical providers who perform abortions and out-of-state patients who travel to the state to receive the procedure from lawsuits. In part, it blocks state agencies from assisting in interstate investigations or prosecutions that would hold someone civilly or criminally liable for undergoing or assisting an abortion.

The law also allows people who have “had a judgment entered against them” for receiving or assisting in an abortion to obtain legal damages.

In Delaware, physicians can legally terminate a pregnancy up until the point the fetus becomes viable, after which abortions are banned unless the procedure is essential to protect the pregnant person’s life or health. Post-viability abortions are also allowed if a medical provider detects a “fetal anomaly for which there is not a reasonable likelihood of the fetus’s sustained survival outside the uterus without extraordinary medical measures,” according to Delaware State Code.

In Hawaii, abortion is legal before a fetus is considered viable and state law says the state cannot “deny or interfere with a female’s right to choose or obtain an abortion of a nonviable fetus” or an abortion that would protect the life or health of the patient.

In 2019, Illinois passed a law that established the fundamental right to reproductive care, including abortion, and legalized abortions up until the point a fetus is deemed to be viable. After that, the procedure is only legally protected when “the abortion is necessary to protect the life or health of the patient.”
Under the law, a fertilized egg, embryo or fetus does not have protected individual rights.

The statute also requires health insurance plans that provide pregnancy-related coverage to also provide abortion coverage and stipulates that out-of-pocket costs for abortions cannot be higher than those costs for pregnancy care under the same plan.

Abortions are legal in Maine until the fetus is considered viable, though there are additional limitations on minors. A post-viability abortion is legal if the life or health of the pregnant person is at risk.
If an abortion procedure results in a live birth, however, the law requires that all reasonable efforts are made to preserve the baby’s life. Violation of the law “shall subject the responsible party or parties to Maine law governing homicide, manslaughter and civil liability for wrongful death and medical malpractice,” according to Maine’s Health and Welfare statutes.
In addition to its existing statute protecting pre-viability abortions, Maine also passed two laws in 2019 that allowed physician assistants and certain highly trained nurses to perform the procedure and required health insurance plans that cover pregnancy care to also cover abortion.

In Maryland, abortions must be performed by licensed physicians and are legally protected up until the fetus is deemed viable. After viability is determined, an abortion can only be provided if it would protect the life or health of the pregnant person or in cases where the fetus is “affected by genetic defect or serious deformity or abnormality,” according to the state’s Health Code.
In April, Maryland’s Democratic-controlled General Assembly overrode a veto from Republican Gov. Larry Hogan and passed a bill that will expand the types of health care professionals that can perform abortions and set up a program to train and diversify abortion providers. The bill, which will go into effect July 1, also requires most health insurance providers to cover abortion services.

Massachusetts amended its state law in 2020 to allow abortions up to 24 weeks. The procedure can be performed by a physician, physician assistant, nurse practitioner or nurse midwife. If the pregnancy has reached 24 weeks or more, the law allows only physicians to carry out abortions to save the patient’s life or protect their mental or physical health. Exceptions are also provided if a “lethal fetal anomaly” is detected or “the fetus is incompatible with sustained life outside the uterus,” the law states.

In a 1990 general election referendum, voters in Nevada approved a law that allows a physician to perform an abortion up to 24 weeks into a pregnancy. Because the statute was approved by a referendum vote, it cannot be changed through legislative amendment or appeal, according to the state’s Revised Statutes.

After 24 weeks, abortions may only be carried out to preserve the life or health of the pregnant person. In cases where the physician believes there is a chance the fetus could survive outside of the womb, the abortion must be performed in a licensed hospital, the law states.

The right to abortion is protected at all stages of pregnancy in New Jersey. A bill signed into law in January codified the right to reproductive choice, including abortion, in the state.

New York state passed a law in 2019 to preserve access to abortions in the event that Roe v. Wade is struck down. Under the statute, abortions can be legally performed up to 24 weeks into a pregnancy for any reason and can be performed after that if the fetus is no longer viable or the patient’s life or health is at risk.
The 2019 law also removed abortion from the state’s criminal code, shielding medical providers from being criminally prosecuted in the state for providing abortion.

In 2017, legislators in Oregon passed a bill which said a public body cannot deprive a person of the choice to receive an abortion or interfere with a medical professional providing the service. The law does not define a time or period after which abortions can longer be performed.

It also required that health insurance plans offered in the state must provide coverage for abortion services, with some religious exceptions.

Rhode Island codified abortion protections in the state when its governor signed a bill into law in 2019 that banned the state from restricting abortions before the fetus is considered viable and prohibited the procedure after viability except when the health or life of the patient is at risk.

The bill also repealed a measure requiring medical providers to notify the husbands of married women before performing the procedure.

Vermont passed a law in 2019 that recognized “the fundamental right of every individual who becomes pregnant” to have an abortion and barred government entities from infringing upon that right. The law does not limit abortions at any time during pregnancy.

Voters in Washington’s 1991 general election narrowly approved a measure that declared a woman’s right to receive an abortion before the fetus is deemed viable and provided exceptions in cases where the procedure would protect the life or health of the woman.

In March, the state legislature amended the law’s language to ensure that people are guaranteed access to reproductive rights, including abortion, regardless of gender identity, allowing the statute to apply to transgender and nonbinary people. The new law takes effect June 9.
The state also requires state-regulated health plans, including college student plans, to cover abortion services if they also cover pregnancy services.

The right to receive an abortion at any stage of pregnancy is protected under Washington, DC, law. The statute prohibits the district from denying or interfering with a person’s right to choose to get an abortion and does not provide a limit on the protection past a certain phase of pregnancy.