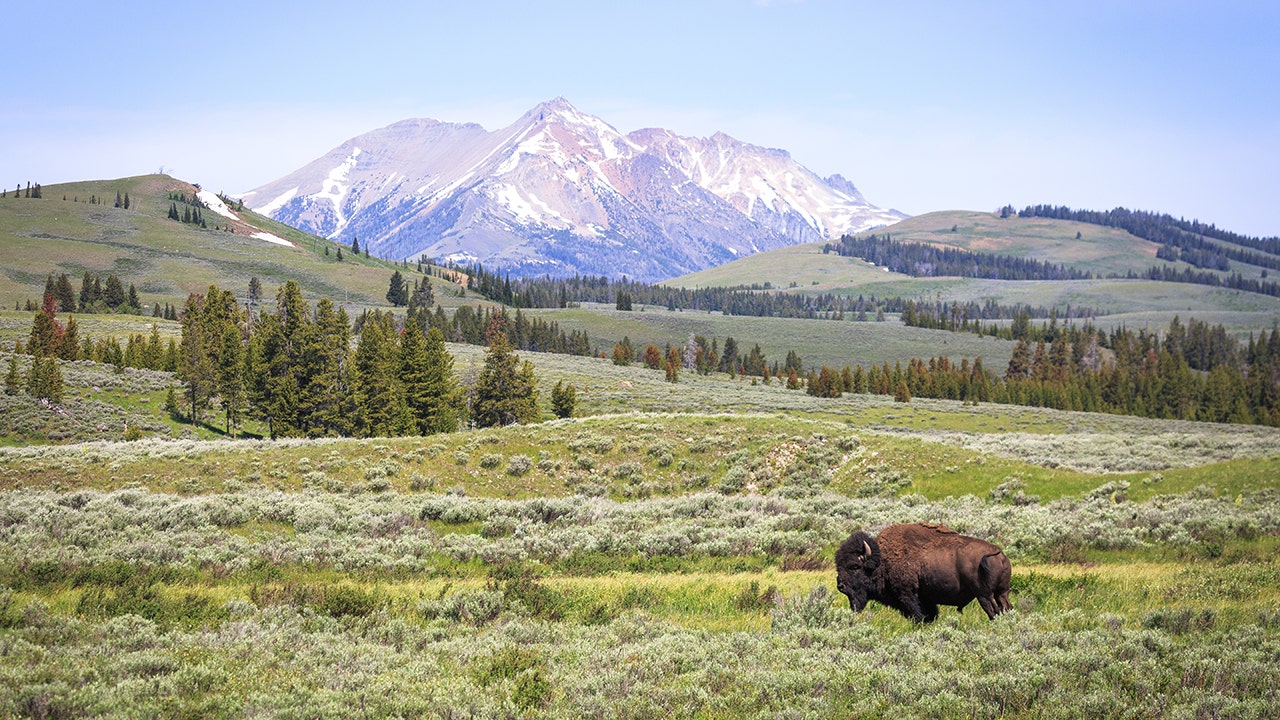 Mountain lions and bison and bears — oh, my!

From Yellowstone National Park to Jackson Hole, wildlife in the Rocky Mountain West is an American treasure — which is why visitors flock to see it.

Park goers are bound to view some amazing animals during their trips, though it’s always smart to know what to expect before encountering native species.

“The best protocol would be to give all bears plenty of space.”

In an interview with Fox News Digital, Jackson Hole EcoTour Adventures founder and Wyoming wildlife expert Taylor Phillips shared an array of helpful information and smart advisories for visitors looking to check out wildlife in the west.

Wyoming’s general rule for animal encounters is to keep 100 yards of distance between predatory animals — bears, wolves, mountain lions — and 25 yards between all other wildlife to ensure the safety of both species and spectator.

“They want nothing to do with people, for the most part,” Phillips said. “But with plenty of space and providing respect to these animals, 99.9% of the time it provides an incredible opportunity.”

HAWAII’S THREATENED SPECIES: WHAT TO KNOW ABOUT PROTECTED WILDLIFE ON THE ISLANDS

Here are some common wildlife in Wyoming and the greater Yellowstone area — and what to know before heading west to see them.

Bear encounters are frequent in the Rocky Mountain west, especially while people are on the road. Park officials are careful to ensure that both crossing bears and curious drivers stay safe.

But solo encounters with bears in the woods are a different idea.

A bear waves to the camera in Wyoming. (Jackson Hole EcoTour Adventures)

Phillips stressed that the protocol for hiking in grizzly bear country is to venture in groups of four or more — and to carry bear spray.

The carnivorous species can pose a threat to humans if spooked, so hikers should make noise by whistling or singing a tune when the path ahead is unclear, Phillips said.

“So, you’re coming through some thick vegetation, and you startle or scare that bear — then that bear would want to defend [itself],” he said.

Phillips encouraged explorers to keep their eyes peeled when out on the landscape, to stay away from animal carcasses where a predator may be nearby and to remember that if an animal’s behavior changes right in front of your eyes, you are too close.

Grizzly Bear 399 has become one of the more famous bears known today, after the 26-year-old mother bear re-emerged from her den last winter with four new bear cubs.

“That is a bit unusual for such an older female to be producing four cubs,” he said. “That’s a lot.”

Park goers have flocked from all over the world to see Grizzly 399 — an animal that Phillips described as a “true matriarch” and an “incredible mother.”

The expert stressed that even though this is a true sight to be seen, onlookers should never get too close to a bear with her cubs.

“She extremely protective of the young,” he said. “The best protocol would be to give all bears plenty of space.”

In Wyoming, the black bear is a hunting species protected by the state, while brown bears like grizzlies are federally managed and endangered, with only an estimated 600 to 800 bears left, Phillips indicated.

Moose, the largest member of the deer family, are known for their massive size and unpredictable nature.

A full-grown bull moose can stand over six feet tall while their antlers can stretch up to five to six feet wide, each antler weighing 20 to 25 pounds, he said.

Moose feeding in a pond in Wyoming on April 16, 2019. (Jackson Hole EcoTour Adventures)

Since moose are drawn to cooler weather, moose watchers should head out early in the morning while temperatures are low to catch a sighting.

Even though these animals are mostly solitary, their temperament can be erratic, so hikers should stay alert for potential encounters, especially of mothers with her calf, said Phillips.

“Moose that are agitated will charge individuals, vehicles, etc.”

If the hackles, or hair, on the back of a moose’s neck is standing up straight, that should be your cue to back up.

“They can run 30, 35 miles an hour,” Phillips said. “A lot faster than we can. And moose that are agitated will charge individuals, vehicles, etc.”

“And at times, they’ll kind of rear up on their hind legs and box with their front hooves … so not a position you want to find yourself in.”

Moose are managed by the Wyoming Game and Fish department as a hunting species; permits are required for hunters to harvest.

Phillips recommended visitors who wish to see elk make a visit in late September, early October, during their “amazing and interesting” breeding season.

Dominant male bull elk, in their prime years of five to seven years old, require a harem of females — anywhere from five to up to 90 female elk at a time, he said.

Male elk are prone to bugling during this time, when visitors can hear an “echoing, billowing” sound across the landscape which communicates strength to other males, said Phillips.

Since the males are full of testosterone during this season, they’re known for taking out their aggression on vehicles, often puncturing car doors with their antlers.

Visitors are likely to see elk when traveling west, since the Jackson Hole elk herd consists of about 11,000 in the one unit; there are only about 300 to 400 moose in the same area.

Wolves out west aren’t exactly the kind found in the tale of “Little Red Riding Hood.”

In fact, they aren’t much of a threat to patrons at all, as long as they’re left undisturbed.

“With wolves, no need to be worried,” said Phillips. “There’s little or no indication that they are dangerous for humans.”

Phillips said there’s “no better place” to enjoy the social nature of wolves than in the Yellowstone ecosystem, since they were reintroduced in the mid ’90s.

He suggested that the wolf’s tendency to sometimes prey on livestock may have perpetuated the myth that they’re dangerous to humans, too.

Onlookers are encouraged to grab their binoculars and lawn chairs to observe the “incredibly intelligent and social animal” when spotted.

A wolf is seen in the distance at Yellowstone National Park. (Jackson Hole EcoTour Adventures/ @joshmettenphoto)

Phillips said there’s “no better place” to enjoy the social nature of wolves than in the Yellowstone ecosystem, since they were reintroduced in the mid ’90s.

Yellowstone now averages 80 to 100 wolves, protected by the state, after the species was pulled from the Endangered Species List in 2017.

A bison is seen among the widespread Wyoming landscape. (Jackson Hole EcoTour Adventures/@joshmettenphoto)

Since the extermination of bison in the 1800s, when an estimated 60 million bison roamed the continent, Yellowstone has since recovered a population of about 3,000 to 4,000, depending on the year.

While Grand Teton and Jackson Hole hold another few hundred bison, visitors can be prepared to check out North America’s largest land mammal — with the biggest male bison weighing up to 2,000 pounds, according to Phillips.

Frequently, bison can pose an issue on Wyoming’s roadways, since they exist in large herds and have no care in the case of traffic jams.

“So, it’s just an opportunity for folks to be patient. Practice your patience out there.”

Bison, like other animals, want nothing to do with people. But bursting their personal space bubble, or coming too close to a mother bison, could be “recipes for disaster.”

At a moment’s notice, a bison has the potential to charge with its two “really” tough and sharp horns.

Once contact is made with a human, the bison could toss its opponent in the air — which Phillips said happens every year at Yellowstone.

“A lot of people get themselves in trouble with bison because they do look docile,” he said. “They do look like big, furry, fuzzy cows.”

Bison are also a hunting species now that there are healthy populations across the country.

Travelers most likely will not encounter mountain lions, but they are a big part of Wyoming’s predatory hierarchy.

Their elusive nature causes them to go mostly unseen and there is no way of calculating a sure number of lions existing in the Yellowstone region, said Phillips.

“They get by,” said Phillips, “by not being seen. They’re more of a sit-and-stalk predator.”

There have been so few encounters across North America throughout the years that there is no evidence mountain lions pose a threat to humans; they will most likely bolt and flee the scene if spooked.

Even though mountain lions are a prevalent predatory species, bears and wolves trump them on the hierarchy, leaving mountain lion kittens at risk of hunger if kills are taken over by bigger animals, Phillips indicated.

The species is spotted frequently in the wintertime, but will continue moving north during the summer months on the hunt for better foraging opportunities.

Out of a majority of western species, sheep are the most comfortable around people, still seemingly unbothered by human presence.