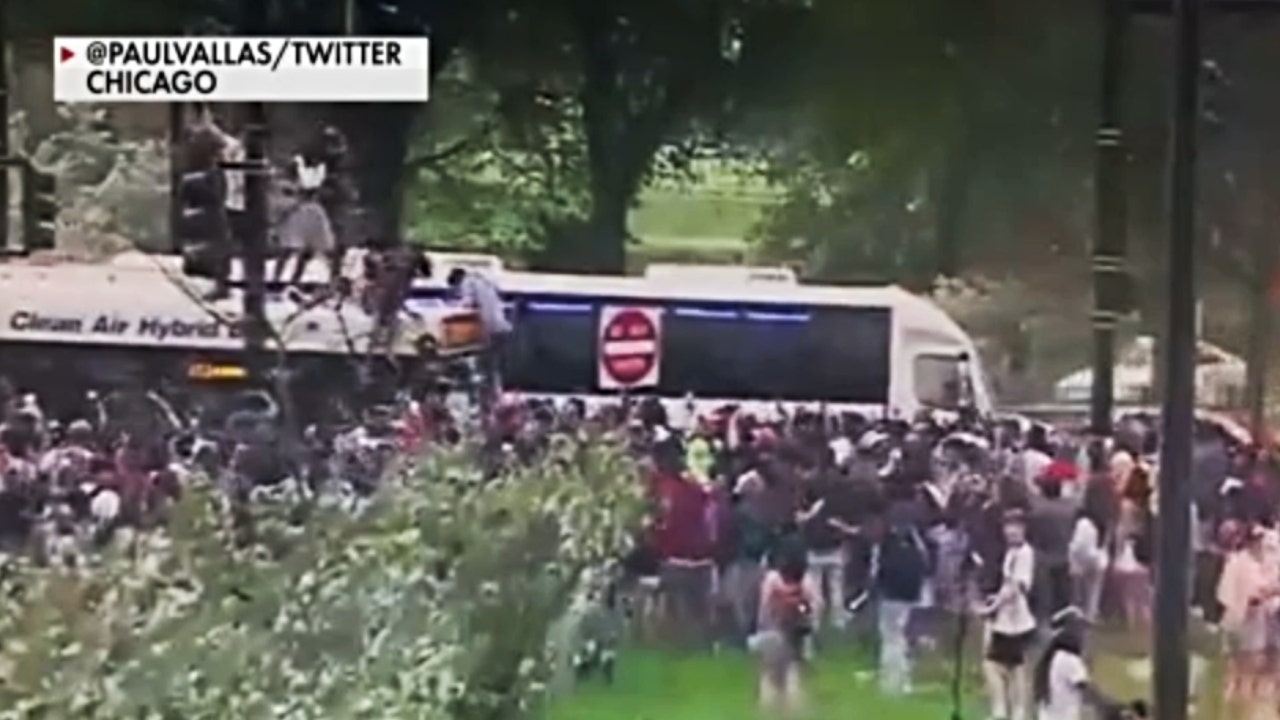 Chicago Alderman Michele Smith of Chicago’s 43rd ward said a group of about 400 people, including juveniles, flooded the streets of downtown Chicago on Wednesday evening.

Videos posted to social media show the young group jumping on vehicles and flooding the streets of downtown Chicago and North Avenue Beach at an event that was “anonymously promoted via social media and encouraged people to bring their own alcohol and drugs.”

“The event advertising said it was open to all ages and would feature a drinking contest, boxing matches, and twerking contests. This promoted event was unpermitted by the City and the Park District,” she said in a Thursday statement. “Police received advance warning of the event and placed extensive resources at every entrance to the beach, including the pedestrian bridge.”

Chicago officers recovered “a significant amount of alcohol” from the event and prevented some attendees from loitering. Afterward, once the group began to disperse from North Avenue Beach, Chicago residents observed gatherings at gas stations and other businesses in the area, but “no one was hurt, and very few arrests were necessary,” Smith said.

Attendees ranged from 14 to 21 years of age, according to the alderman.

CPD told Fox News Digital that “police responded to a crowd of youths which were dispersed from the beach and monitored as they left the area,” and made “one arrest…for open alcohol on the public way.”

Paul Vallas, former CEO of Chicago Public Schools and budget director for the city, posted video footage of a mass of people jumping on buses during the chaotic night.

“Tonight downtown is in absolute chaos. Juveniles jumping on top of buses, cars, terrorizing residents, tourists & businesses,” he wrote. “These mass groups fought CPD & only minimal arrests were made. Why? Because CPD isn’t allowed to, they have no plan & they didn’t have enough manpower.”

In a May 9 op-ed for the Chicago Tribune, Vallas pointed to Chicago Mayor Lori Lightfoot and Police Chief David Brown’s “closure of the city’s Juvenile Intervention and Support Center” (JISC) as a reason behind a recent surge in juvenile crime.

“Because juveniles have been so heavily involved in recent lawlessness, procedures for managing young arrestees could also use some reform. When arrested, underage suspects are due to be released from custody after processing; only a parent or a legal guardian should be permitted to pick them up. If a juvenile younger than 14 has been arrested multiple times on suspicion of committing similar offenses downtown, penalties should be sought against the child’s legal guardian under the Illinois child abandonment statute,” Vallas wrote.

He added that the closure of JISC “should be reversed and the recommendations by the city inspector general to bring the center’s design and operations in line with diversion program best practices should be implemented.”

Lightfoot, in conjunction with Brown and the Chicago Department of Family and Support Services, reformed the JISC to divert eligible juveniles who are arrested away from traditional processing and court procedures and toward other services with the potential to “get their record expunged,” according to the city’s website.

Meanwhile, city law enforcement is feeling the strain of staffing shortages. CPD has already canceled officers’ days off ahead of Memorial Day weekend in anticipation of violence. Some officers may work 12-hour shifts that weekend if necessary, law enforcement officials told WLS.

The force has lost more officers than it has gained every year since 2019. Between January and October 2021, 900 officers left CPD while only 51 joined the Department, the outlet reported.