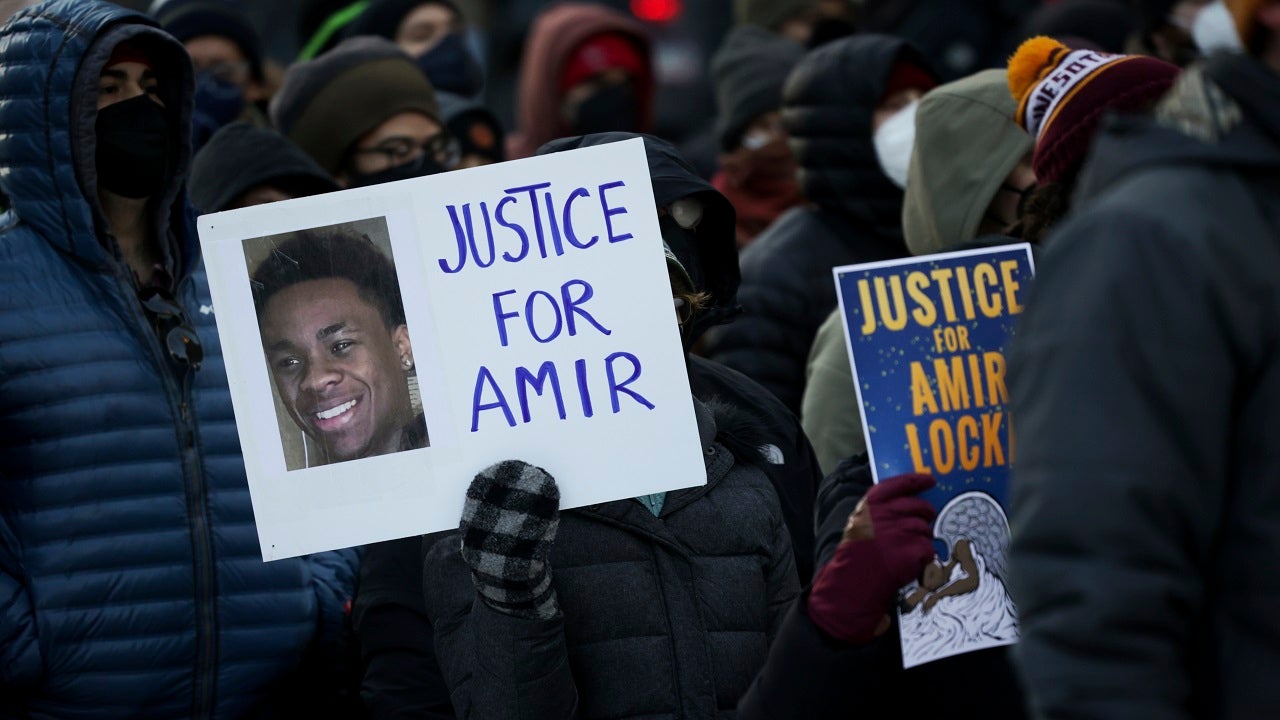 The teen cousin of Amir Locke, who was shot and killed by Minneapolis police executing a no-knock warrant in February, agreed to a plea deal in the murder of a suspected drug dealer that had prompted the raid.

The Ramsey County Attorney’s Office announced Wednesday that Mekhi C. Speed, who turned 18 in the months following the Jan. 10 deadly shooting of 38-year-old Otis R. Elder during a suspected drug deal outside a St. Paul, Minnesota, music recording studio, has agreed to the case being moved to adult court.

In exchange, the state will drop the top charge of second-degree intentional murder, and Speed is to plead guilty to the lesser count of aiding and abetting second-degree murder in court Friday.

“It’s a slap in the face to our family,” the victim’s sister, Latasha Elder, told Fox 9 Minneapolis. “I’m not sure why they will give him a plea deal that low.”

A protester holds a sign demanding justice for Amir Locke at a rally on Feb. 5, 2022, in Minneapolis.
(AP Photo/Christian Monterrosa)

Speed was the subject the homicide investigation that prompted the early morning Feb. 2 raid that resulted in Locke’s death.

The police shooting of the 22-year-old Black man prompted riots, and Minneapolis Mayor Jacob Frey issued a temporary moratorium and then a broader policy ban on no-knock warrants.

Hennepin County Attorney Michael Freeman and Minnesota Attorney General Keith Ellison announced in April that Minneapolis police Officer Mark Hanneman will not face charges in Locke’s death. His use of deadly force was justified because body camera video showed Locke moving around beneath a blanket and emerging with a gun pointed toward at least one SWAT officer before Hanneman opened fire.

Elder’s sister said Speed, not police, should be held accountable for his cousin’s death.

“I believe he should get some type of sentence for that as well,” Latasha Elder told Fox 9. “It’s his fault. All the damage that he caused.”

People march at a rally for Amir Locke on Feb. 5, 2022, in Minneapolis.
(AP Photo/Christian Monterrosa File)

She feared that “my brother won’t be the last” even if Speed gets locked up for a decade or more, arguing he already had his second chance in being granted supervised release of a minor after shooting another teenager in a leg outside a Brooklyn Park, Minnesota, gas station in September 2020.

“If he gets another chance, my brother won’t be the last,” she said. “Because look at the system. The system failed.”

In requesting the no-knock warrant to enter the apartment, a detective had argued it could protect officers’ safety and noted how the teenage suspects in Elder’s murder had been seen flashing different firearms to include a rifle in social media posts and were linked to a string of carjackings.

Fox News Digital previously confirmed that the no-knock warrant was signed off by Hennepin County Judge Peter Cahill, the same judge who presided over the trial for former Minneapolis police Officer Derek Chauvin, who was convicted of murder and manslaughter in the death of George Floyd.

Though the no-knock stipulation was granted, police body camera footage showed about nine SWAT officers each announced “police, search warrant” as they entered the apartment where Locke was ultimately killed.

The then 17-year-old Speed, who Fox News Digital did not name in prior reports because of his age and his case originally being prosecuted in juvenile court, was arrested four days after the raid about 120 miles away in Winona, Minnesota. A 16-year-old suspect was also later arrested as an alleged accomplice in Elder’s murder.