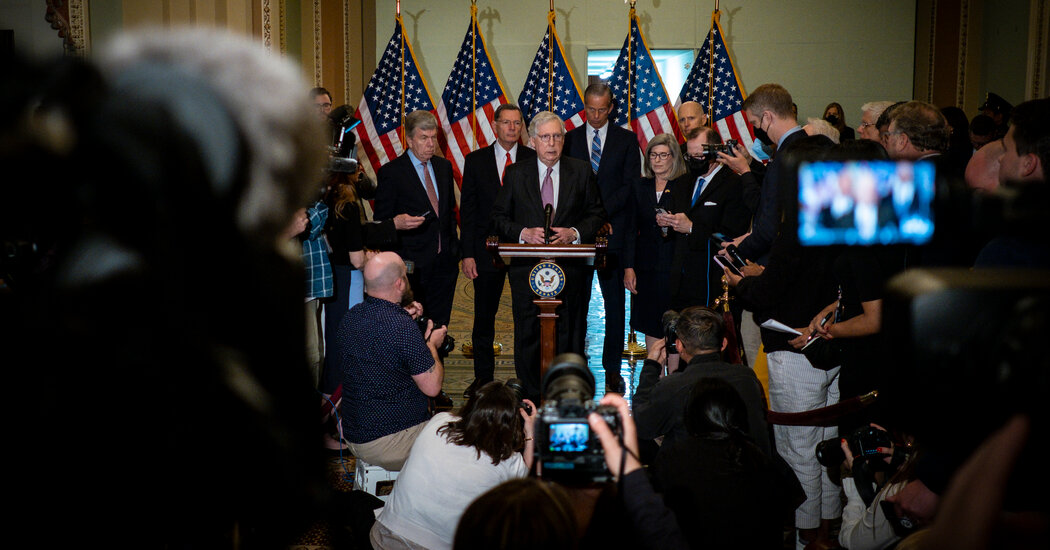 Democrats tried and failed on Wednesday to push forward legislation to safeguard abortion rights nationwide, as Republicans and one Democrat in the Senate blocked an effort to enshrine the landmark Roe v. Wade precedent in federal law after a leaked Supreme Court opinion suggested it was about to be overturned.

With 51 senators opposed and 49 senators in support, Democrats fell short of the 60 votes they would have needed to take up sweeping legislation to guarantee abortion access and explicitly bar a wide array of restrictions.

The outcome was never in doubt, given the 50-50 split in the Senate and the deep partisan differences over abortion rights. But Democrats pressed ahead anyway, hoping that the vote would help them portray Republicans as extremists and persuade voters that they needed to elect more Democrats in November if they hoped to preserve abortion and other rights.

Republicans, who unanimously opposed the measure, were joined by one Democrat, Senator Joe Manchin III of West Virginia, who broke with his party to vote against taking up the bill. Mr. Manchin, who opposes abortion rights, said the legislation was overly broad, noting that it would go substantially further than simply codifying Roe and warning that it would “expand abortion.”

The resulting vote showed that a majority does not now exist in the United States Senate to support legalizing abortion nationwide. Democrats who supported the bill framed it as a call to action, ahead of midterm elections, for voters who support abortion rights to elect like-minded candidates who will preserve them.

From Opinion: A Challenge to Roe v. Wade

“This vote clearly suggests that the Senate is not where the majority of Americans are on this issue,” said Vice President Kamala Harris, who called the vote in a symbolic show of support by the White House. “A priority for all that care about this issue — the priority — should be to elect pro-choice leaders.”

The Women’s Health Protection Act would protect abortion access nationwide, going far beyond simply codifying Roe, the landmark Supreme Court decision that in 1973 legalized abortion across the country. It would explicitly prohibit a long list of abortion restrictions, including some that have been enacted by states since Roe was decided and that have severely limited access to the procedure.

Even as they work to avoid a backlash against their party ahead of the midterms, Republicans did not shy away from the abortion debate on Wednesday, seeking to cast the bill as radical and describing Democrats’ goal as legalizing abortion on demand at any stage of pregnancy with no limits.

“Today, Democrats have decided to line up behind an extreme and radical abortion policy,” Senator Mitch McConnell, Republican of Kentucky and the minority leader, said on Wednesday.

The legislation, he said, “goes way, way beyond codifying the status quo; it would roll back many existing laws.”

The State of Roe v. Wade

What is Roe v. Wade? Roe v. Wade is a landmark Supreme court decision that legalized abortion across the United States. The 7-2 ruling was announced on Jan. 22, 1973. Justice Harry A. Blackmun, a modest Midwestern Republican and a defender of the right to abortion, wrote the majority opinion.

What was the case about? The ruling struck down laws in many states that had barred abortion, declaring that they could not ban the procedure before the point at which a fetus can survive outside the womb. That point, known as fetal viability, was around 28 weeks when Roe was decided. Today, most experts estimate it to be about 23 or 24 weeks.

What else did the case do? Roe v. Wade created a framework to govern abortion regulation based on the trimesters of pregnancy. In the first trimester, it allowed almost no regulations. In the second, it allowed regulations to protect women’s health. In the third, it allowed states to ban abortions so long as exceptions were made to protect the life and health of the mother. In 1992, the court tossed that framework, while affirming Roe’s essential holding.

Senator Susan Collins, Republican of Maine, who proposed a narrower bill to codify Roe, said the Democratic bill was championed by “far-left activists.”

Still, Democrats were on track to end the day with the headline they wanted voters to read: that Republicans had blocked their effort to safeguard abortion access. Polls show a solid majority of voters support abortion rights, though they also reflect substantial backing for at least some limits on the procedure.

Mr. Schumer was clear that short of passing legislation, he wanted to show Americans “where every single U.S. senator stands” on the issue. He warned on Wednesday that if Republicans won control of the Senate in November, they would outlaw abortion nationwide.

“A national ban on abortion is the extreme of the extremes, and it is now possible in a Republican Senate,” he said, noting that Mr. McConnell had said as much last week.

The Biden administration on Wednesday said it strongly supported passing the legislation, saying the “urgency” has never been greater. In a signal of the administration’s support for the legislation, Vice President Kamala Harris presided over the vote in her role as president of the Senate, even though she had no tiebreaking vote to cast.

“The president looks forward to working with Congress throughout the legislative process and signing the Women’s Health Protection Act into law,” the administration said in a statement that made no mention of the fact that the bill had no path to passage.