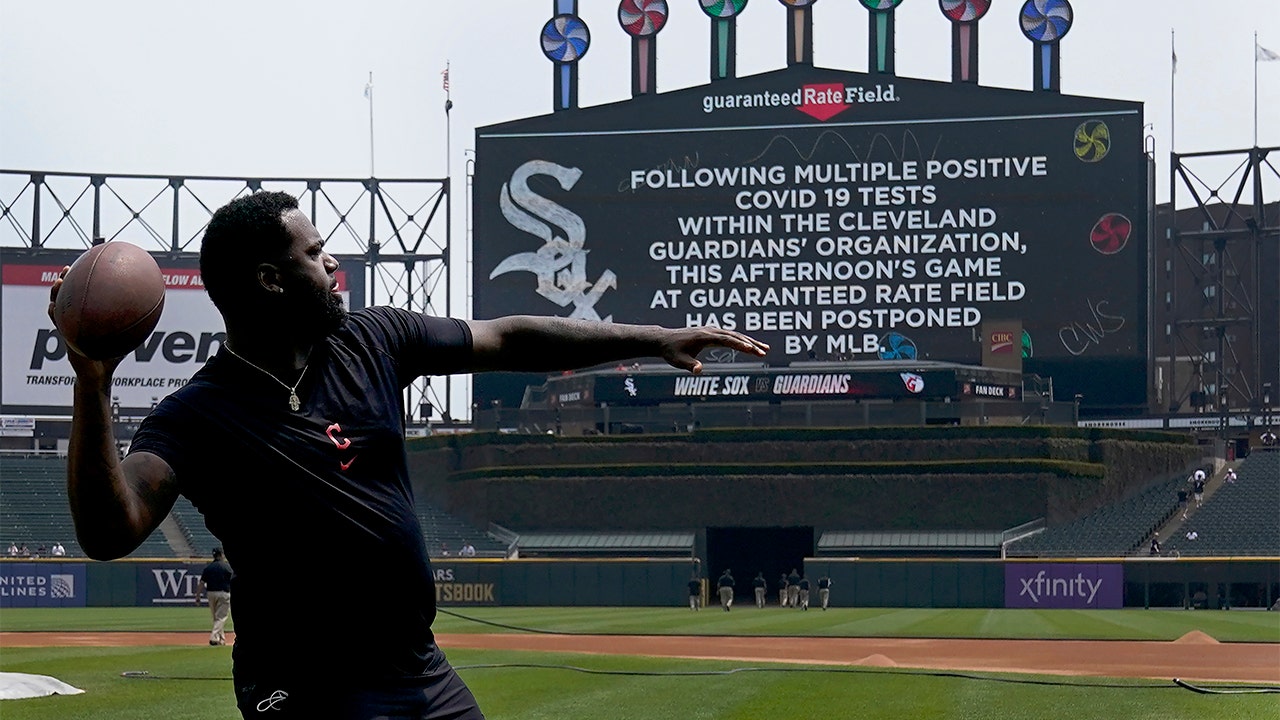 Wednesday’s series finale between the Cleveland Guardians and the Chicago White Sox has been postponed following multiple positive COVID-19 tests within the Guardians organization, the league announced.

It’s the first MLB game to be postponed this season because of the coronavirus.

The game was postponed to allow for continued testing and contact tracing. The league said it will provide a rescheduling update when it becomes available.

Cleveland Guardians’ Franmil Reyes throws a football to teammate Myles Straw as the scoreboard informs fans that the baseball game between the Chicago White Sox and the Guardians has been postponed due to multiple positive COVID-19 tests within the Guardians organization, Wednesday, May 11, 2022, in Chicago.
(AP Photo/Charles Rex Arbogast)

The announcement comes as Guardians manager Terry Francona tested positive for the virus just a few hours before the scheduled first pitch.

Francona, who has dealt with health problems in recent years, is not showing any symptoms, the team said.

Manager Terry Francona #77 of the Cleveland Guardians looks on before a game against the New York Yankees at Yankee Stadium on April 22, 2022 in New York City. The Yankees defeated the Guardians 4-1.
(Photo by Jim McIsaac/Getty Images)

Cleveland just went through a coronavirus outbreak recently, with infielders Owen Miller, Yu Chang, and pitchers Cal Quantrill and Anthony Castro all being placed on the COVID-19 injury list.

Both teams split the first two games of the three-game series. Cleveland won 12-9 on Monday, and Chicago won 4-1 on Tuesday.

Cleveland Guardians’ Bryan Shaw talks on the phone in the dugout after the game between the Chicago White Sox and the Guardians was postponed due to multiple positive COVID-19 tests within the Guardians organization, Wednesday, May 11, 2022, in Chicago.
(AP Photo/Charles Rex Arbogast)

It’s unclear when their series finale will be rescheduled. The Guardians have an off day Thursday before starting a weekend series in Minnesota on Friday.

Meanwhile, the White Sox don’t have a break in their schedule and are set to host the New York Yankees on Thursday.

The Associated Press contributed to this report