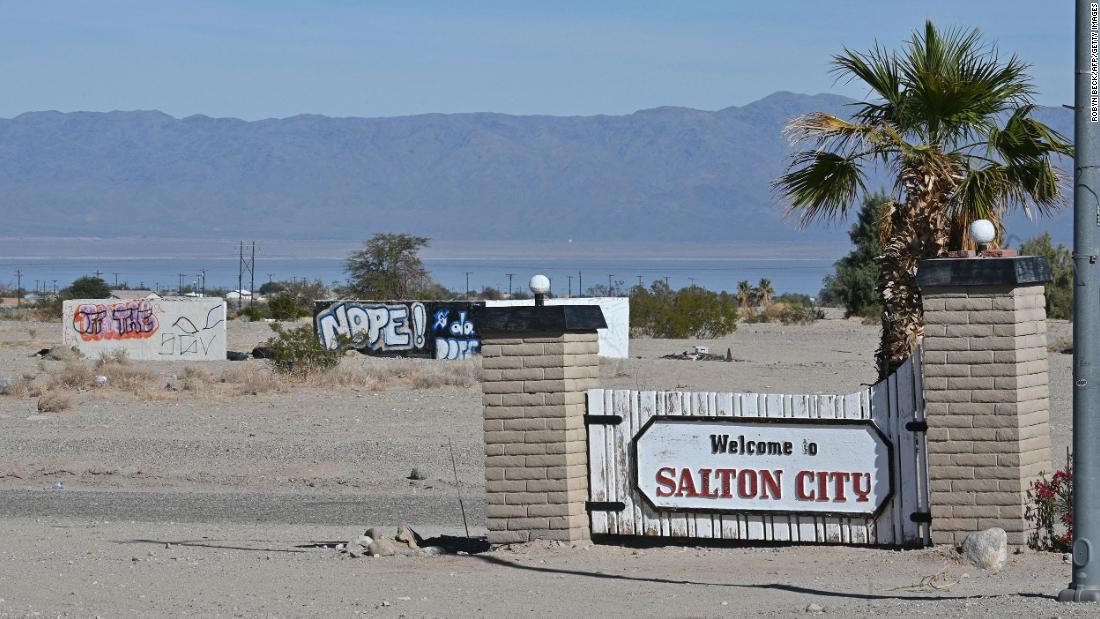 The Salton Sea, which lies roughly in the middle of the massive geologic low point, isn’t really a sea, at all. The largest inland lake in California, it’s 51 miles long from north to south and 17 miles wide, but gradually shrinking as less and less water flows into it. At one time, it was a thriving entertainment and recreation spot, business that has also largely dried up. It’s left behind abandoned buildings and shallow, gray beaches. The highways that ring the lake are traversed now mostly by passing trucks.

Over the past few years, companies have been coming here to extract a valuable metal, lithium, that the car industry needs as it shifts to making electric cars. Lithium is the lightest naturally occurring metal element on Earth, and, for that reason among others, it’s important for electric car batteries, which must store a lot of electricity in a package that weighs as little as possible.

What’s more, with the Salton Sea Basin’s unique geography, engineers and technicians can get the lithium with minimal environmental destruction, according to companies that are working there. In other places, lithium is taken from the earth using hard rock mining that leaves huge, ugly scars in the land. Here, it exists naturally in a liquid form, so extraction doesn’t require mining or blasting.

Over thousands of years, floodwaters from the Colorado River, carrying minerals pulled away from the Rocky Mountains, the Ruby Canyon, Glen Canyon, the Grand Canyon and more, have washed into these lowlands. Time and again the water has come and evaporated, leaving behind metals that have ended up deep in the ground.

Lithium is abundant in the Salton Sea Basin. In fact, people working to extract it say there could be enough to make batteries for all the electric cars expected to be built in this country for many years, freeing the United States from reliance on foreign lithium suppliers. That’s been a priority for the Biden administration.

The Earth’s crust is thin here, and there’s water deep underground close to the seething hot liquid rock inside the Earth, called magma. Trapped in that naturally occurring oven, that water has become a super-heated mineral stew.

Geothermal energy companies have been here for decades drilling down into the nearly 700 degree water, allowing it to instantly boil up out of the ground. Steam from the hot brine — so-called because of its high mineral content — spins turbines, generating electricity. It’s then pumped back down into the Earth where it gets heated back up to start over again. This sort of energy is considered clean and renewable since it relies on heat occurring naturally in the Earth.

“It’s one of the largest geothermal energy fields in the world,” said Derek Benson, chief operating officer of EnergySource Minerals.

How much lithium is here, exactly, and how much might be extracted, are questions that a research team from Lawrence Berkeley National Laboratories are working to figure out.

Roughly a quarter of the water taken from deep underground here is dissolved rocks, a vastly higher mineral concentration than you you’d find in ordinary seawater, according to Patrick Dobson, a Berkeley Labs geologist leading the research. Lithium makes up roughly 200 parts per million, he said, which compares to about 10 parts per million in some other hot geothermal fields.

“That’s why this is of interest,” he said. “It’s not just any geothermal brine. There’s certain places where there’s an enrichment in lithium in the brine and the Salton Sea is the place in the US where we’re really focusing our attention on.”

People who’ve worked with this brine have long known about its contents, but there’s no use for loads of undifferentiated minerals and selectively extracting them wasn’t economical. But that was before electric cars became a big deal, and the price of lithium started to rocket. So companies have invested in new technologies to pull lithium from the brine.

“We use what we call lithium selective adsorption,” said Benson. “And so we pass the lithium bearing brine across one of our proprietary adsorbers. It has a chemistry that has an affinity for lithium and really only the lithium.”

One of the challenges is how efficiently these technologies can draw lithium out of the brine, said Berkeley Labs’ Dobson. While there’s a lot of lithium in the brine, these extraction techniques probably won’t be able to take out 100% from every drop.

“We know from measurements of rocks that are still in the reservoir that not all the lithium is present in the brine,” he said. “There’s still lithium present in the rocks.”

Collecting lithium now looks like a bigger moneymaker for companies like EnergySource than their original business of just generating electricity from the steamy soup. In fact, other companies are getting into the geothermal energy business largely so they can get lithium. In their case, electricity is just a bonus.

Not far from EnergySource’s tan-colored geothermal power stations, a company called Controlled Thermal Resources has its own small power station. This one is currently in the testing phase, but CTR has already formed a partnership with General Motors, which will purchase lithium produced here for its electric vehicles. More recently, the Italian EV battery company Italvolt announced plans for a spin-off company to work with CTR. Plans call for Statevolt, as the spin-off is called, to build a battery manufacturing facility nearby, using both energy produced by CTR’s generators and lithium taken from brine there. The plant could someday produce enough batteries for 650,000 electric vehicles annually, according to Italvolt.

Putting battery manufacturing on-site will eliminate material shipping costs as well as the carbon dioxide emissions from all the ships, trains and trucks needed to carry the lithium to battery factories that are, today, mostly located in Asia, said Rod Colwell, CEO of CTR.

This new rush of interest could mean good things for a community that needs some help. Decades ago, the Salton Sea was a tourist destination, with people flocking to the California desert oasis to enjoy boating and water skiing. That was before evaporation dried up the lake, concentrating pollutants in the shrinking body of water.

“You would find people from Hollywood, the luminaries from Southern California coming to boat and enjoy the fine restaurants, playing golf,” said Frank Ruiz, Salton Sea program director for the National Audobon Society. “That was the life of the Salton Sea in the 50s and 60s and only 50 years later, this is what we have,” he said, looking around a largely abandoned lakeside beach.

“You went from being the Western Riviera to being one of the worst nightmares environmentally and public health-wise,” he said.

The lake has been shrinking due to a lack of natural in-flows, combined with years of drought and rising temperatures from climate change. As the lake continues to recede it leaves behind sand and gooey mud high in pollutants. That, combined with the fact that area is a natural basin that tends to trap and hold smoke and smog from surrounding areas, contributes to high asthma rates, he said.

Today, the area feels almost abandoned besides some evidently thriving date farms with rows of thick-trunked palm trees. Artists have been attracted to the area’s blank canvas of empty structures and open spaces, creating a colony of wildly painted and decorated houses. Large wire-and-concrete sculptures inhabit the beach.

What has flooded into the area several times over the eons. The lake that exists today was created around 1905 when man-made canals overflowed into the desert lowlands. For a long time, the large lake that resulted was a boon for traveling birds, as well as for watersport enthusiasts.

“We used to get over 400 different species of birds and pretty much all the species that we have in California, in the Salton Sea,” said Ruiz. “From an environmental perspective, it is one of the last standing jewels along the Pacific Flyway, especially here in California.”

The lake and its water are not linked to the lithium-rich undergound brine but, Ruiz hopes, lithium extraction can provide jobs and revenue to help rebuild the Salton Sea region’s economy and maybe even its damaged environment, in addition to putting more electric cars on the road.

“This can be really good for the region altogether. Not just for Imperial County, for the Coachella Valley, for all Californians,” Ruiz said. “I mean, nationwide, it can be a catalyst.”