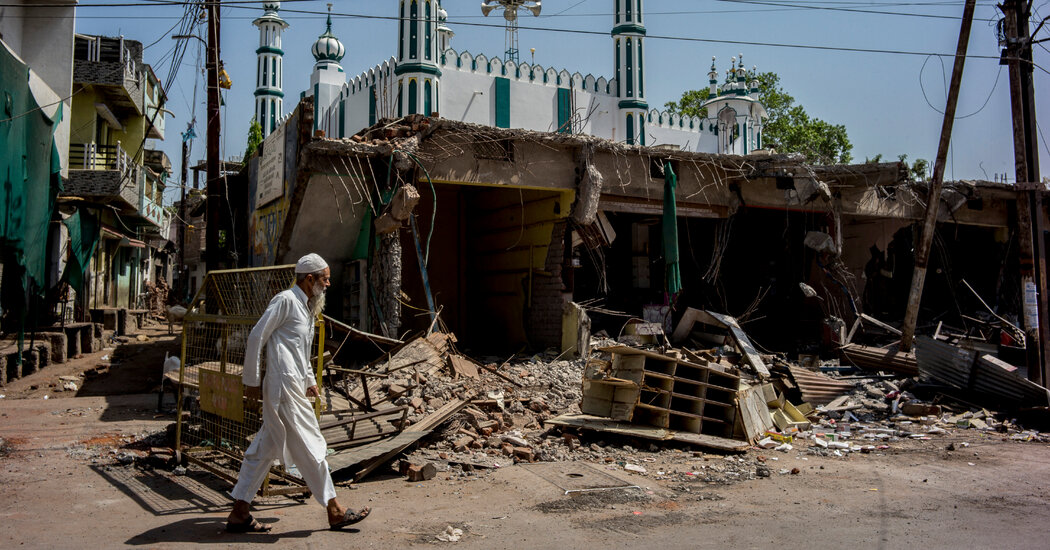 KHARGONE, India — The authorities sent bulldozers to the small city in central India within 24 hours of clashes between Hindus and Muslims that turned into a mob-fueled rampage.

The Hindus said stones had been thrown from the direction of the mosque, where Muslims were breaking the Ramadan fast. The Muslims said the Hindu procession had moved toward them with provocative chants.

Before any official investigation or court ruling, the home minister of the state, Madhya Pradesh, appeared to fault the Muslims and ordered demolitions — the same swift, one-sided punishments imposed in two other states over recent clashes. “The houses from where the stones were pelted, we will turn those houses into piles of stone,” said Narottam Mishra, the home minister.

The communal tensions in Khargone, New Delhi and Gujarat — and the demolitions that followed in each — are part of a worrisome new pattern, according to analysts, activists and former civil servants.

In the past, such clashes, while often deadlier, were usually set off by a local issue and would remain contained to single area. The trigger for the 2002 Gujarat riots, which left more than 1,000 dead, was a train fire that killed dozens of Hindu pilgrims.

The recent violence, the most widespread communal tensions in recent years, played out across several states, multiple clashes with the same characteristics and one-sided punishments. And they are rooted in the rhetoric of right-wing groups at the national level that are targeting Muslims through provocation, a campaign emboldened by the silence of the country’s top leaders.

The concern, say analysts, activists, and former civil servants, is that the clashes will become more frequent, pushing the nation into a cycle of violence and instability.

The nationwide provocations by right-wing activists, which spread swiftly through social media, inspire local groups, who are increasingly turning religious occasions into political events promoting a Hindu-first vision of India that relegates minorities to second-class citizens. When the recent tensions spilled into violence last month, authorities in those places rushed to dole out punishment that fell disproportionately on Muslims and in ways that circumvented the legal process.

After clashes in New Delhi, demolition, mainly of Muslim-run shops and kiosks, continued for nearly two hours after India’s chief justice issued an order to halt. Bulldozers swooped up tea stalls and ripped out staircases that left a family stranded without a way down. They destroyed the walls of a mosque before stopping short of a nearby Hindu temple.

Officials in the three states justified the razing, saying that they were going after illegal encroachment. But the timing, along with speeches by local politicians calling for the demolitions, suggested a link to the clashes, activists and analysts say.

“I fear that we are in the stage of perpetual violence,” said Asim Ali, a researcher who has studied the rise of Hindu nationalism, known as Hindutva.

“Social media and 24/7 news channels mean that Hindutva groups, which are now very technologically savvy, graft into the local context any hot-button communal issue that takes place anywhere in the country,” he said.

In an open letter to Prime Minister Narendra Modi, more than a hundred retired senior civil servants called for an end to hate and “vigilante violence” that they said had “embedded itself deep in the recesses of the structures, institutions and processes of governance.”

“The administration of law, instead of being an instrument for maintaining peace and harmony, has become the means by which the minorities can be kept in a state of perpetual fear,” they said.

Another group of retired officials countered with a letter in support of Mr. Modi, calling the concerns “empty virtue-signaling.”

“What do you mean by provocation?” said Vinod Bansal, a spokesman for Vishwa Hindu Parishad, a right-wing group behind some of the recent processions.

“These are false allegations levied by the perpetrators to save their skins and hide their sins,” he added. “Hindus are in fact victims in all such cases.”

Khargone, a town of about 200,000 in Madhya Pradesh state where the worst of the communal violence happened on April 10, has a history of small-scale tensions. About three-quarters of the population is Hindu; in many neighborhoods, Hindus and Muslims share the same streets.

Like other recent clashes, the Khargone violence centered on the birthday celebrations of a Hindu god, which overlapped with Ramadan this year.

One procession ended peacefully. Authorities approved a second on a designated route to avoid the mosque at its busiest hour when Muslims gather to break their Ramadan fast. But that procession, which included hundreds of participants, took place later, at peak time.

Among the chants repeated was one heard across other states, too: “If you are to live in this country, you have to hail Lord Ram.”

Anil Gupta, an organizer, said the delay was unintentional, caused by participants’ late arrival. “We did not play any provocative music or songs,” he said. “To take the name of Lord Ram is not a crime.”

Violence erupted. Mobs rampaged for much of the night, destroying property from both communities. Altogether 73 people, including the region’s senior most police officer, were injured.

The police returned the body of a Muslim man to his family days later, with little explanation of how he died. After about a week, the police said they had arrested several Hindu men in connection with his death.

An inquiry by a group of opposition parties contended that the police had initially withheld the victim’s identity so as to justify the government’s heavy-handed response to Muslims.

In the past, officials and religious leaders put in place measures to avoid flare-ups, like assigning members to keep watch at sensitive spots. Such steps broke down in Khargone.

Madan Lokur, a retired justice on India’s Supreme Court, said the police typically tried to forestall violence by garnering intelligence on potential trouble. Not doing so, he said, “will only embolden the aggressors.”

“I see these events as a disturbing pattern which will lead, eventually, to injustice and further vitiate the atmosphere prevailing in some parts of the country and stoke fires and retaliation,” Mr. Lokur said.

Concerns about the fairness of India’s law enforcement in dealing with communal tensions have intensified in recent years.

An Amnesty International report found that after months of peaceful protests against a citizenship law seen as discriminatory toward Muslims turned violent in 2020, the police in New Delhi arrested “Muslims on a mass scale immediately after the riots even though the minority community bore the brunt of the violence” and accused officers of“torturing people.”

“If you try to defend yourself, the police will come for you with its full might,” said Mehmood Pracha, a lawyer who represented several Muslims accused in the 2020 riots.

The Delhi High court, in a recent hearing, raised questions about why the police had not stopped a procession by a right-wing group that had led to the clashes in April. Instead, the court said, the police “were accompanying the said illegal procession.”

Suman Nalwa, a spokeswoman for the New Delhi police, denied the accusations around the 2020 riots and rejected concerns over the April clashes.

“The rhetoric and narrative against police is created by interested groups who want to vilify the police,” she said.

“If anyone looks the wrong way toward any mother, sister and daughter, I will not only send you to jail but will destroy your life, your house, your shop — nothing will be left,” he said in a recent speech.

Officials have followed his lead. After a complaint last month by relatives of a Hindu woman, alleging that a Muslim man had “kidnapped” her, a senior district official retweeted Mr. Chouhan’s speech. The official then tweeted pictures of bulldozers demolishing a shop and house of the man “accused in the kidnapping of a girl student.”

A local court later ordered protection for the couple, describing them as “living together as per their own free will.”

In the days after the Khargone clashes, nearly 150 people were arrested. Riyajuddin Sheikh, a local Muslim social worker, said community leaders compiled lists showing about 125 of the arrested were Muslim. Among the dozens of homes and shops destroyed by bulldozers, the majority belonged to Muslims.

Anugraha P., the district magistrate in Khargone, denied the authorities had unfairly targeted Muslims or the police had done too little to prevent the clashes. “We have to ensure neutrality, and give a message to the people that hatred and fear should not be there,” she said.

Hasina Fakhroo, a 56-year-old widow and mother of six whose house was razed, said the authorities “took out their anger” through collective punishment. She said that no stones had been thrown from her home or the immediate area.

She provided documents to The New York Times showing that she paid property taxes and that her home’s construction was partly funded by a plan the prime minister had championed. But Ms. Fakhroo said she had been receiving notices that the house was on illegally occupied land.

“I shouted ‘Allow me to die here, run the bulldozer over me, where will I go? I am a widow,’” Ms. Fakhroo recalled of the demolition.

The tensions are prompting some to abandon the area.

“My in-laws are pressuring me that we should leave this place,” said Rakesh Kale, a Hindu resident who has painted a “For Sale” sign on his wall.