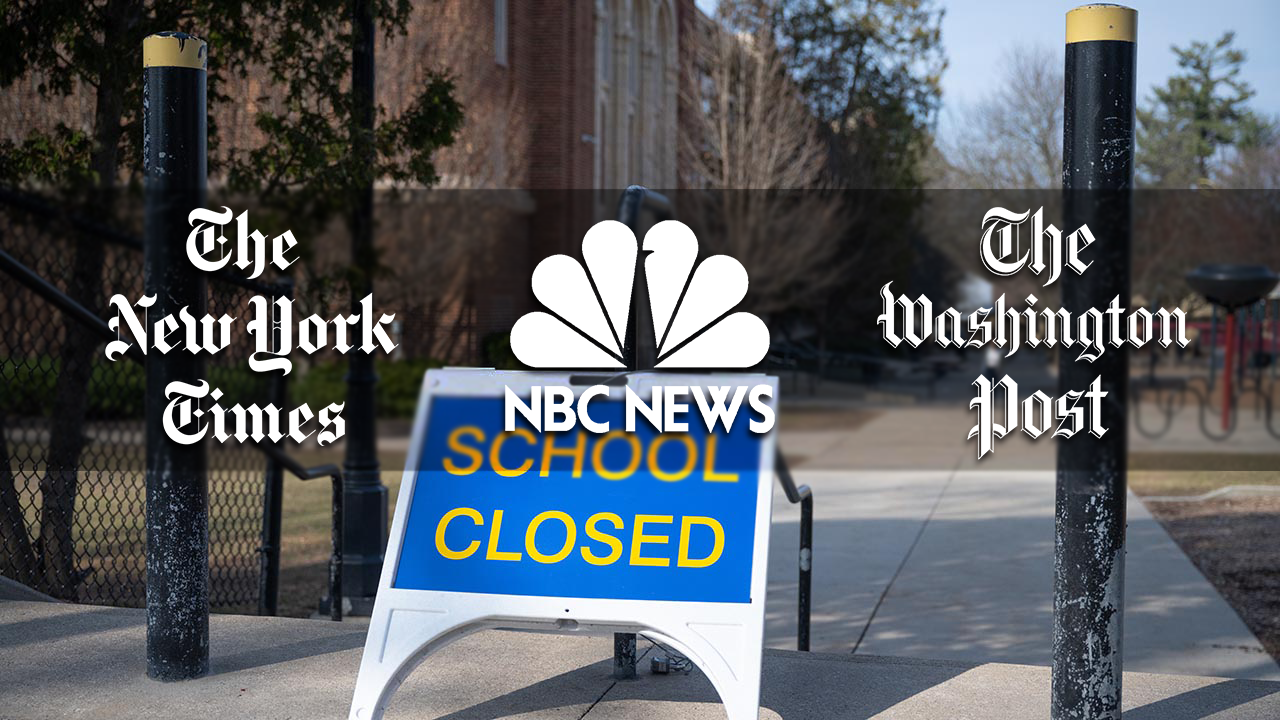 The New York Times published a newsletter last week noting academic researchers have come to a “consistent conclusion” that remote learning throughout the COVID-19 pandemic was “a failure.”

The Times appeared to have agreed with the assessment of critics in the body of the piece, admitting that “Extended school closures appear to have done much more harm than good, and many school administrators probably could have recognized as much by the fall of 2020.”

Throughout at least the first 18 months of the pandemic, members of the liberal media faced accusations of downplaying the consequences of school closures, overhyping the impact of COVID-19 on children and repeatedly moving the goalposts for reopening in accordance with the whims of The White House, and the country’s most powerful teachers unions.

A sign taped to the front door of Pulaski International School of Chicago reads, School Closed after Chicago Public Schools, the nation’s third-largest school district, said it would cancel classes since the teachers’ union voted in favor of a return to remote learning, in Chicago, Jan. 5, 2022.  REUTERS/Jim Vondruska
(REUTERS/Jim Vondruska)

The Times newsletter drew ridicule from parents and conservatives who pointed out the negative impacts of shuttering schools was self-evident, although author David Leonhardt has written on and discussed the situation for months. In January, he wrote he had “long been aware” the pandemic had upended children’s lives but didn’t recognize how “alarming” it was after pulling data showing how badly children were falling behind academically and suffering from mental health problems.

Many left-leaning officials appeared to only change course on remote learning following the omicron outbreak that began late last year.

New York Magazine writer Jonathan Chait wrote in January that the progressive left likely was starting to notice that school closures throughout the pandemic were a “catastrophic mistake.”

Indeed, a shift in the coverage of school closures by liberal analysts, reporters and columnists has now begun trickling out, with more outlets sounding the alarm on widening educational gaps, especially noticeable among minority groups.

At the peak of the omicron wave in December, a Washington Post analysis by Anthony Faiola touted a UNCIEF global report that, alongside a growing body of other studies, found students “suffered massive educational losses” throughout the pandemic.

“Learning setback projections have gone from bad to worse, with a disproportionate hit for poor and otherwise marginalized children regardless of whether they lived in rich or poor countries,” Faoila wrote in part.

MILLBURN, NJ – MAY 09: A general view of the message board in front of Millburn High School during the Coronavirus (COVID-19) pandemic which reads, “Schools Closed but We Never Cancel Hope” on May 9, 2020 in Millburn, NJ.
(Photo by Rich Graessle/Icon Sportswire via Getty Images)

A subsequent piece from The Post, shining a light on education in Washington D.C., warned of worsening literacy rates in the nation’s capital. With data from D.C. Public Schools, it concluded the “literacy proficiency gap” between White students and students of color has “continued to widen” throughout the pandemic, at a time when the national literacy rate has already dropped across the board.

That same month NPR examined the “biggest impacts” of school shutdowns across the world after two years of pandemic data. Fact-checking an early pandemic prediction that student learning will suffer and “marginalized students will be most affected,” NPR found the claim to be true.

“All the data we have to date shows students falling behind where they would have been without the interruption. As predicted, these gaps are consistently bigger for low-income, Black and Latino children. This study from November found these gaps were bigger at schools that had less in-person learning in the 2020-2021 school year,” the piece noted.

The piece also found it true that children are at a higher risk for “toxic stress” when schools are shuttered, and found it “mostly true” that high school dropout rates increased while college enrollment dropped.

A month later, NBC News also cited research on the negative consequences of shuttering schools and drew attention to a Harvard study based off testing data from 2 million U.S. students. The study found that achievement growth was “particularly low” for students at “high-poverty schools.” The study was also noted by the New York Times.

The piece largely focused on a recent study from Stanford that examined nearly every urban school closure between 2000 and 2012, and found that affluent people generally consider schools with mostly White or Hispanic students an asset, but have “negative associations” when it comes to schools serving a large amount of Black students.