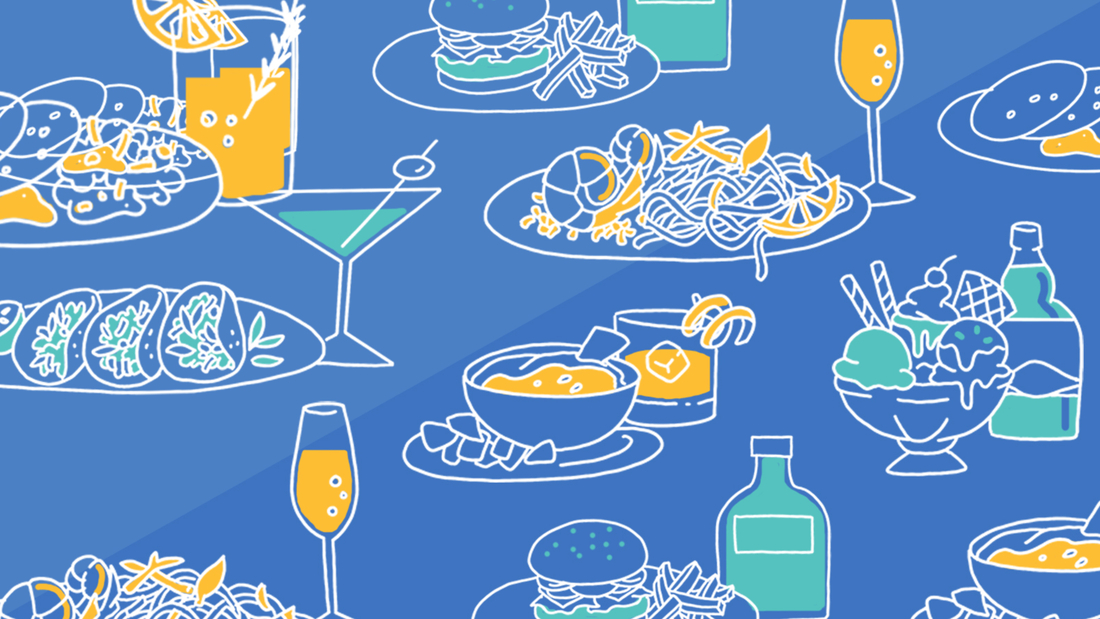 (CNN) — Champagne with strawberries, red wine with steak, tequila with tacos and even Scotch with chocolate are familiar pairings of food and drink.

More unexpected matches, however, are just as tasty — if not better.

“Most people don’t realize that the simple food we eat every day at home, whether we’ve cooked it or are ordering out, goes incredibly well with all kinds of wine, spirits and even cocktails,” says Matthieu Yamoum, the beverage director of the Baccarat Hotel in New York City.

“It’s a fun to experiment with these pairings, especially now since most of us all over the world are stuck at home for the time being.”

Yamoum, who grew up in Champagne, France, says that the sparkling wine pairs beautifully with Thai cuisine. Yamoun’s father, who is Thai, owned a Thai restaurant in Champagne, so his family frequently drank the eponymous bubbly with dishes from the Southeast Asian country.

“There are actually a lot of similarities between Champagne and Thai food,” he says. “You have notes of ginger, lemongrass and citrus in both.”

Dishes to order or make at home include pad Thai, Penang curry, (which has a distinct lemongrass and coconut flavor) and papaya salad, a classic Thai appetizer that’s juicy and fresh and heavy on the lime, similar to the citrusy, light tones of Champagne.

When he’s in the mood to splurge, Yamoum loves drinking Piper-Heidsieck Rare, notably the very Champagne served at the Academy Awards for the past six years.

Otherwise known as silver or plata tequila, this Mexican spirit has a crisp and clean flavor that’s a beautiful complement to a leafy green salad, says Iain McPherson, the mixologist and owner of several bars in Edinburgh including Panda & Sons and Hoot The Redeemer.

“Green salads are usually light and crunchy and may have a slightly salty vinaigrette. The taste and texture plays off the taste of a blanco tequila,” he says.

Go for a salad with a sturdy, crisp leaf such as iceberg, romaine or gem, and add in raw vegetables with a crunch such as bell peppers, carrots and fennel.

If you want some protein, make it a lean one such as grilled chicken breast, shrimp or white fish. “A red meat would be too overpowering,” says McPherson.

He prefers his blanco tequila neat but says that it also sips well with ice and a squeeze of lime. Any brand will do, but his favorite his Tequila Ocho.

Midori, a green and sweet (but not overly sweet) melon liqueur from Japan, has long been a staple in cocktails such as the Midori sour. While it was long regarded as a low-brow, cheap mixer, McPherson says Midori is making a comeback and is now an in-vogue ingredient in sophisticated cocktails.

He loves drinking it on its own (be sure that it’s been chilled) and enjoying it with cured ham such as prosciutto, mortadella or salami — the pairing is a play off the popular Italian appetizer of prosciutto with melon.

“The sweet melon brings out the saltiness of the meat, and the meat cuts the sweetness of the melon,” he says. You can also eat these meats in a sandwich and with a thin layer of mayo but nothing else.

Agostino Perrone, the director of mixology at The Connaught hotel in London, highly recommends pairing a vodka martini with Mexican tacos.

Make sure that the tortillas are made from corn and not flour, as corn tortillas have a more interesting texture that mingle well with both classic martini seasonings, a twist of lemon or olives.

“Your garnish has a similar feel in your mouth as the corn tortilla does,” he says.

Plus, Perrone says that vermouth, the other key ingredient in a martini, has the aroma and botanicals that complement the flavor of the tacos.

Your tacos can have whatever filling you prefer: beef, shrimp, fish, pork or nopal, which is cactus and Perrone’s top pick.

Dessert wine with mac and cheese

Who needs sweet stuff with dessert wine when mac and cheese is so much better?

It’s a pairing that Yamoum swears by. But when he makes the dish at home, he uses blue cheese.

“The cheese can be pungent, and the residual sweetness of the wine washes away the pungency,” he says. “You can also use any stinky, softer cheese such as Roquefort.”

There are many varieties of sweet wine, and you can pick up an inexpensive bottle at your local liquor store, says Yamoum.

He likes German Rieslings and Hungarian Tokajis. From France, he goes for a Sauternes from Bordeaux or Vouvray Moelleux from the Loire Valley.

A Negroni with mezze

Being Italian, Agostino drinks a Negroni, a cocktail from Italy that’s a combination of gin, sweet vermouth and Campari, almost every day.

And while he’s sipping, he enjoys a mezze plate of hummus and baba ghanoush, accompanied by crackers, pita and raw vegetables such as gem lettuce hearts, endive and carrots.

“Each ingredient in the Negroni boosts the flavors of the dips — the smokiness of the baba ghanoush and the creaminess of the hummus,” he says. “In fact, when I eat hummus and sip a Negroni, I get an amazing velvety sensation in my mouth that makes me want to eat and drink more.”

A gin and tonic with Indian food

Gin is packed with botanicals and spices, and so is Indian food, flavored with a variety of spices such as cumin, cardamom, turmeric and garam masala.

“Gin adds a layer of complexity to Indian dishes, especially any curries because it has so many ingredients just like Indian food,” says McPherson. “The spirit and the dishes emphasize the qualities in each other but not in an overwhelming way.”

To tone down this bold pairing a notch, try a gin and tonic with Indian cuisine — it’s a refreshing cocktail that will soften the flavors and spices of the dishes.

Yamoum says the dark spirit from Scotland, especially a single malt that’s been aged in a sherry cask, is the perfect partner for ice cream.

“I love vanilla ice cream with my drink, but caramel, chocolate or coffee would be as delicious,” he says. “Or, make the match more playful by having an ice cream sandwich.”

Scotch that’s been aged in a sherry cask has a slightly sweet finish, he says, that rounds out everyone’s favorite frozen food. If you don’t have any Scotch on hand, a bourbon or rye or a Japanese or Irish whisky are great substitutes.

Mezcal and a burger

Mezcal, a Mexican spirit made with agave, has a smokiness that makes it a winning match with a hamburger, according to McPherson.

“The meat is salty and savory and takes on slightly smoky notes when you have it with mezcal,” he says. “It’s almost like having beef that’s been smoked all day.”

Sip your mezcal first, he says, either with ice or neat, and then take a bite of the burger. If it’s too strong, add in splash of club soda or make a spicy margarita with a mixer and jalapeno peppers.

Shivani Vora is a New York City-based writer who travels as often as she can, whether that means going on a walking safari in Tanzania, a mother-daughter trip with her 10-year-old in Istanbul or surfing in northern Portugal.